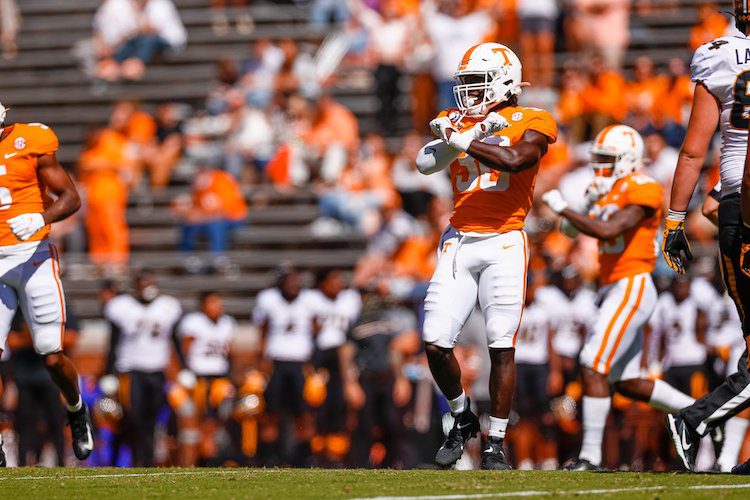 Vols head coach Jeremy Pruitt was forced to dismiss outside linebacker Kivon Bennett on Tuesday afternoon after the redshirt junior was arrested and charged with unlawful possession of a gun and drugs.

Bennett’s dismissal is a big loss for Tennessee’s football team. He currently leads the Vols and is tied for second in the SEC in tackles for loss (7.5). Bennett is tied for the team lead and fourth in the SEC in sacks (4.5).

Pruitt explained how the Vols will look to replace Bennett’s production during Wednesday’s SEC Teleconference.

“Tyler Baron has played well for us and really has played more and more each week,” Pruitt said. “Roman Harrison played really well early in the season. He’s been banged up for several weeks. But with the off weeks we’ve had here, he’s had a chance to get healthy. And Morven Joseph.”

Harrison is the most experienced option for the Vols at the outside linebacker spot opposite of senior Deandre Johnson. The sophomore backer has played in all seven games this season and ranks third on the team in sacks with two. Harrison has four total tackles, three of which have been a tackle for loss. Two of his three tackles for a loss came against No. 3 Georgia earlier this year.

Baron has been the most productive out of the three options. He’s played in all seven games, tallying 16 tackles, two of which have been tackles for a loss. Baron has yet to record a sack this season.

Joseph has played in every game this season for the Vols, but he hasn’t spent as much time on the field as Harrison and Baron have. Joseph has only record two tackles this season. He has 0.5 tackles for a loss to his name.

Tennessee could use more production from its young outside linebacker trio. Not only to replace the production lost from Bennett, but to also create more chaos in the backfield of opposing offenses. The Vols rank seventh in the SEC in sacks (16.0) and eighth in tackles for loss (43.0).

UT will need to generate quite a bit of pressure if it stands any chance of slowing down Florida quarterback Kyle Trask. Tennessee is scheduled to kickoff with the Gators at 3:30 p.m. ET on CBS from Neyland Stadium this Saturday.