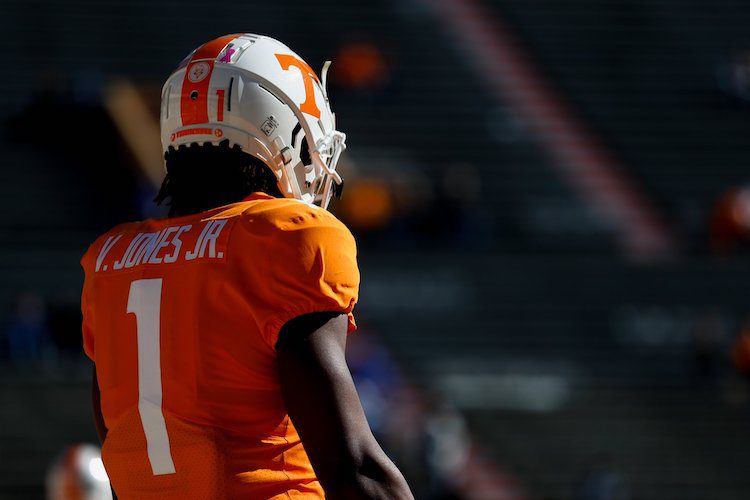 “I am excited to be returning to Tennessee for my final year,” Jones said in a statement he tweeted out. “Go Vols!”

Jones has tallied 2,345 kickoff return yards in his career, the second-most among active FBS players. He caught 22 passes for 280 yards and three touchdowns this season, his first in a Tennessee uniform. Jones averaged 12.7 yards per reception.

The Saraland, Alabama native began to hit his stride towards the end of the season. Jones had a breakout performance at Vanderbilt on Dec. 12, setting career highs in catches (7), receiving yards (125) and receiving touchdowns (2), including a 74-yard touchdown catch. He made four catches for a season-high 70 yards and made his first touchdown catch as a Vol a week earlier against #6 Florida.

“First, I must give an honor to God who strengthens me: my family for their continuous love and encouragement: and my fans who have followed and supported me through my many transitions,” Jones said. “I am thankful for the abundance of opportunities that have been placed before me for which I will never take for granted.

“I arrived to beautiful Rocky Top just shy of year ago in February 2020 as a grad transfer. In such a short amount of time, I have worked to earn the trust of both my teammates and coaches. Just as importantly, I have had to earn the trust of the fans and students. I thank you all for entrusting me and the end of the season was just a glimpse of what’s to come.

“I started playing the game of football at the age of 4. My first touchdown was the result of a “pro right 28 pitch” where I played running back. During a postgame media interview this season, I expressed that I felt like I was back to my high school ways having fun. Growing up, I was raised on SEC football and now it is my reality.”

Unfinished business and that is on everything I love! 😤
.
.
Forever!🍊 #VFL pic.twitter.com/JmUzzix75L

Jones is able to return for a second senior season with the Vols because the NCAA deemed this past season a free year of eligibility due to the uncertainty of the ongoing COVID-19 pandemic.

The 6-foot playmaker enrolled at Tennessee in the spring of 2020 and reunited with assistant head coach Tee Martin, who recruited him at USC when he originally signed with the Trojans in February 2016.

In his three playing seasons at USC, Jones made 36 receptions for 347 yards to go along with 1,947 kickoff return yards on a school-record 81 attempts. He averaged 21.4 yards per kickoff return and finished his USC career second all-time in school history in kickoff return yards, 194 behind record-holder Adoree’ Jackson.

Jones has scored a touchdown three different ways at the college level – receiving (4), rushing (1) and kick return (1). He has played in 46 games and made 11 starts.