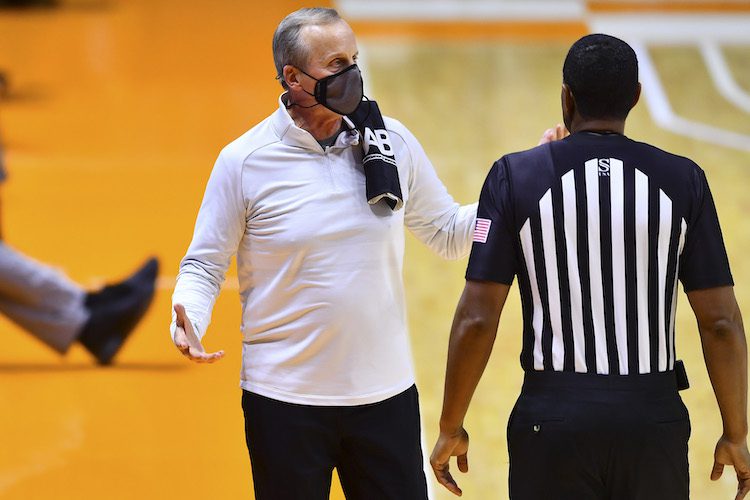 Vols head basketball coach Rick Barnes met with the media on Friday afternoon following Tennessee’s 70-56 loss to Oregon State in the opening round of the NCAA Tournament to discuss what went wrong with his basketball team. Here’s everything Barnes had to say:

“Congratulations to Oregon State. They played a good basketball game. Just sorry that we didn’t give them more competition, really. I just told our team it was disappointing in the way we started out. They had an inside game and we didn’t get a chance. We didn’t do what we have to do to stop that. And we had no inside game. They were certainly packed back in there, wanting us, daring us to take threes, take shots. We had some looks, they didn’t go down. Didn’t get much on the offensive boards, the way we needed to. Overall, again, give them credit for it. Again, disappointed that I didn’t think we played our best basketball. It’s hard to play this game when the ball is not going in and when you don’t have an inside presence.”

On if he thought his team played tight early on:

“I did. I was really surprised, the freshmen especially. They looked like being here in the NCAA Tournament was something they probably grown up watching. They were out of character. Yeah, you could tell they were skittish. There’s no doubt about it. Yves (Pons) picking up some fouls there early hurt us. And we just did some things offensively to start the game where we just weren’t synced up together. Again, I told them actually during a timeout we can’t be afraid to play basketball now. We have to play together, stay together. And you keep thinking about calling timeouts, but sometimes you feel like the more timeouts you call, the more they tighten up. You’re just hoping they’ll get going and get loose, make some shots. But we didn’t. Never really got the flow that we wanted. We had opportunities, even at the end. You think about them missing free throws, as bad as we played. The turnovers, all year, some of the way we turn over the ball really mystifies me at times. But yeah, there’s no doubt, at the start of the game we had guys that were a little bit stage fright, I thought.”

On John Fulkerson missing the game:

On how surprised he was by the performance:

“Thinking about it, I was just thought we had played really good basketball. Even though we had lost to Alabama. We came into this and we just didn’t have it. I’m a little bit surprised, to be quite honest with you. I’m disappointed because I thought we had gotten by all that. Because the last couple weeks, we had really been competing hard defensively, doing some things. Then we came out and just got totally out of character. Some of it, with the young guys, did I expect it? Maybe a little bit. I thought maybe if we could just get them settled down. We talked about it, the very first timeout. Hey guys, it’s a game. Let’s just quit acting like it’s something more than it is. Yeah, we’ve worked hard to get here, you’re here. But getting here is part of it, now you have to want to make something out of it. Then we’d come out of the timeout, wouldn’t execute because somebody was saying I have to go make it happen. There were just too many guys in that kind of mindset. Just too many guys trying to do too much. Then defensively I felt like we weren’t moving the way we needed to. I just felt like we needed to be more aggressive, to play the kind of defense we normally play. Some of that, what carries over on offense carries over on defense as well.”

On fixing the offense over the summer:

“We have to have an inside presence. We’ve never not had some kind of an inside presence. We didn’t have any at all today. There are different ways to do it. You can drive the ball. But they were heavy gapped. They were really in there because they were determined to make us try to either do too much, turn it over, or getting there deep, taking tough shots. Which we did too many times. And kick out and hope we weren’t making shots. But they were determined. We actually ran a play, executed it, and got a couple blocked, where, give them credit for that. Where we said you have to get it and go up quick. We’ve got to change. That’s going forward. We’ve got to get back to having an inside presence the way we play and the way we want to play.”

On his message to the fans:

“I just told the team you don’t ever take this for granted. I’ve had more former players text me about how they always remember me talking about getting here. It’s not an easy thing to do that. And for all that we’ve been up and down with this year, obviously John Fulkerson has meant a lot to our program, he was a big part of our team coming in. Yves Pons, when John goes out, things shift to Yves, where he can’t quite be as effective because he’s our secondary guy that we play through on the inside. Now he gets all eyes on him. And the freshmen, they had their moments, but very inconsistent. That was a problem for our team. If you look at our team all year, it was the inconsistency. Not really knowing from game to game what we were going to get. If you ask me, that’s the most disappointing thing because to be a championship-caliber team, you have to be more consistent. You can’t turn the ball over the way we did at times. And you’ve got to be able to rebound. But when you don’t have that inside presence, again, today, we had a couple offensive rebounds but not anything like we need to have when you’re not shooting the ball the way we were today.”

On the next step for Keon Johnson and Jaden Springer:

“I would expect that they’ll do what everybody does now. They’ll go through the process. That’s what they need to do. And they’ll go from there. Obviously in the meantime we’ll plan on doing what we have to do for our roster next year.”

On how frustrating this season has been:

“It has been. The whole thing has been a crazy year. In some ways, I’ve said it, I admire these guys for what they’ve had to go through. It’s been a difficult year. I think it has been a tough year for the younger guys, I really do believe that. No one has had a more frustrating year than John Fulkerson. And I’ll tell you, there are a lot of things I feel bad about, but maybe none more than him. Because he had high expectations coming in and he struggled for the major part of the year. Not because of any other thing than, I mean, he was trying. Where we were, where people thought we would be, it was based on him having three great weeks at the end of last year, when he was playing lights out. Everyone expected he and Yves Pons to pick right up there. And everyone had their moments, but it just wasn’t consistent enough. The fact that John had the type of year (he had), and the way it ended, is really a major disappointment for all of us. He’s such a great kid. And how hard he works at it, what he means to Tennessee, it’s been a hard year. If I said anything otherwise, I wouldn’t be honest with you.”