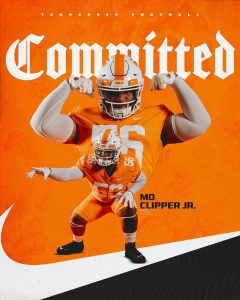 Tennessee Football target Maurice Clipper Jr. has officially announced his commitment to the Tennessee Volunteers in a Twitter post on Saturday.

Clipper is a three-star offensive tackle in the class of 2022 on both Rivals and 247 Sports. He also marks the tenth signing of the class for coach Josh Heupel and the third offensive lineman for the Vols.

Clipper, a native of Alpharetta, GA, took three official visits in the month of June. He first went to Virginia Tech on June 11 and then took a visit to Louisville the next weekend.

Clipper closed the month by visiting Tennessee on June 25.

Clipper burst onto the national scene after a very impressive showing at the Atlanta Under Armour Camp earlier in 2021. The talented offensive lineman was routinely matched up with some of the state’s best defensive linemen.

After the camp in Atlanta, Clipper quickly went from an under-targeted recruit to one of the nation’s most underrated players.

Clipper did not lose a single rep against his opposition during the Under Armour camp.

The underrated three-star prospect has now joined Reddick and Brian Grant as the three offensive linemen in Tennessee’s 2022 class.

Coach Josh Heupel and the Tennessee football team have been on a roll in July, but will need to keep their foot on the gas as football season draws closer and closer.