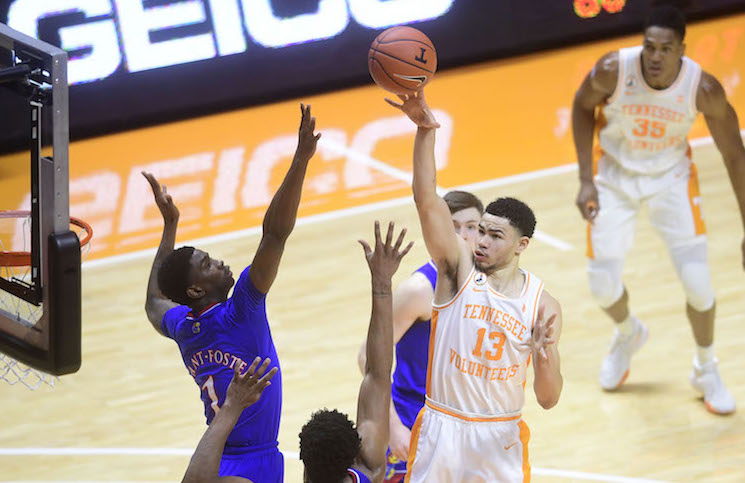 After dropping its first game to Belgium, Finland won its last two games of the event beating Hungary, 89-72, and Japan, 76-71.

The junior forward scored eight points on 3-of-5 shooting while adding eight rebounds against Hungary. Nkamhoua earned the third most minutes for Finland, starting in the win.

Against Japan, Nkamhoua was just one of two Finland players to score in double digits. The 6-foot-9 power forward scored 11 points on 5-of-9 shooting, grabbing five rebounds and sparking offense with four assists.

Nkamhoua led the Finland International team in minutes in the contest against the host country Japan.

The junior flashed his defense in Japan, too. Totaling three steals in Finland’s two wins in the event.

Nkamhoua will now return to Knoxville to rejoin his Tennessee teammates as offseason workouts are well underway.

It’s an important offseason for Nkamhoua as he’ll look to assert himself as a reliable big man off the bench for the Vols. Last season, Nkamhoua averaged 2.3 points and 1.3 rebounds in 7.2 minutes a game.

Nkamhoua will compete with incoming freshmen Jonas Aidoo and Brandon Huntley-Hatfield as well as center Uros Plavisic for playing time.

The Vols’ forward wasn’t the only Vols to play international basketball this summer as Santiago Vescovi played in Olympic qualifying for Uruguay and five-star freshman Kennedy Chandler helped the U19 Team USA win the FIBA Basketball World Cup.