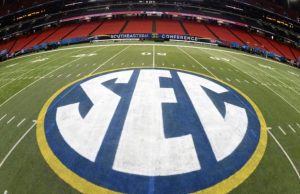 Another UT could be headed into the SEC as the University of Texas, along with the University of Oklahoma, have reportedly expressed their interest to join the Southeastern Conference with a response seemingly in their favor.

According to The Houston Chronicle on Wednesday, which cited “a high-ranking college official with knowledge of the situation”, the SEC could make the announcement regarding the addition of Texas and Oklahoma within a couple of weeks.

The addition of Texas and Oklahoma would bump the SEC up to 16 teams. Not to mention, it would also make the SEC the “first national superconference” according to the report.

Spokesmen for Texas and Oklahoma have already spoken out on their intent to not speak out on the matter.

“Speculation always swirls around collegiate athletics,” said the spokesperson representing Texas. “We will not address rumors or speculation.”

Oklahoma responded in a similar fashion.

“The college athletics landscape is constantly shifting,” Oklahoma said through a spokesperson. “We don’t address every anonymous rumor.”

However, the Director of Athletics for current SEC member Texas A&M, Ross Bjork, made a statement on the situation, as well.

“We want to be the only SEC program in the state of Texas,” Bjork said in a statement. “There’s a reason why Texas A&M left the Big 12 – to be standalone, to have our own identity.”

According to a report on Wednesday night from Orangebloods, the University of Texas Rivals affiliate, the departure of Texas and Oklahoma from the Big 12 could start “as early as next week.”

The statement from Geoff Ketchum and Anwar Richardson reads as follows:

“A high-level university official informed Orangebloods the expectation is that Texas and Oklahoma would inform the Big 12 as early as next week that both schools intend to decline on extending the existing set of media rights.”

The report also mentioned that the contracts at hand are set to expire in 2025.

With a potential superconference on the horizon, the SEC could be looking at 16 teams in the conference. The addition of Oklahoma would also up the SEC’s reach to 12 out of 50 states in the country. That being Tennessee, Kentucky, South Carolina, Georgia, Florida, Alabama, Mississippi, Missouri, Arkansas, Louisiana, Texas, and Oklahoma.