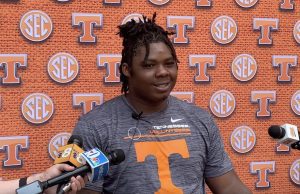 The Tennessee Volunteers wrapped up their fifth fall practice of the Heupel Era Monday morning. The team began fall training camp last Wednesday and is working hard during each workout before the season-opener on Sept. 2.

After practice concluded on Monday, a few of the Tennessee offensive linemen met with the media. Each one of the players talked about their own views on Tennessee’s line, as well as their thoughts on the progression of Tennessee’s defensive line. They also talked about what it means to play football for Tennessee, who is the “nastiest” player on the line, and much more.

Watch video highlights of the fifth Tennessee football practice, along with practice notes and observations, and more at Rocky Top Insider.

“I’ve been really blessed. I was a fan once, obviously, so it would be a dream. Just living the dream.”

“If everybody plays together, and we’re confident, we’ll go out there and kick some butt.”

“We are deep on the offensive line position. Way better than when I first got here. We got about 16-17 guys. I know for sure about 14-15… we’re battling.”