Tennessee has produced some accomplished and beloved wide receivers over the last few seasons, and current Tennessee WR Cedric Tillman got to learn from each of them. Tillman watched players like Marquez Callaway and Josh Palmer lead Tennessee’s offense in different ways. And at some point, he realized that it would be his turn to take the torch.

And in 2021, the time has come for Tillman to become a leader in Tennessee’s receiver room.

On Monday, Tillman spoke about some of his former Tennessee teammates’ advice and encouragement for him as the new season approaches.

“Some of the older guys, like Marquez and Palmer, telling me, ‘Hey man, we’re gone. You have to take that next step,'” Tillman said. “That’s kind of something I had to look in the mirror to do. So that’s all I’m trying to do, and that’s why my confidence is going up. Because I know I have to lead this group.”

As a redshirt junior, Tillman has more experience in the Vols’ program than any other Tennessee receiver. However, that has only amounted to eight catches in 25 games played. But with the overhaul to the Tennessee program and the addition of Josh Heupel and his staff, Tillman is ready to excel in 2021.

Callaway and Palmer are examples of two former Tennessee receivers that led their team through adversity and made it through to the NFL. And both are loved and respected among the Tennessee fanbase. So for Tillman, even though he hasn’t had much on the field production, he is using the experience of former Tennessee greats to bring him up to speed for the season.

Tillman noting that he is using advice from Palmer and Callaway on Monday is incredibly fascinating. Mainly because of its connection to another quote from Tillman earlier in the summer. On The Slice Podcast in early July, Tillman referenced what kind of traits he picked up from Jauan Jennings, Callaway, Palmer, and others. With so much time in between the quotes, it’s safe to say it wasn’t just a topic fresh on Tillman’s mind that he talked about two days in a row. Instead, it comes across as a lesson that Tillman has been meticulously applying for months.

“[Jennings and Callaway] came to work every day,” Tillman said on The Slice. “That’s what I try to tell these young guys. I’m like, ‘Man, we can joke around with this, this, and that, but when we step out on that field, I didn’t see Marquez laughing. I didn’t see Jauan laughing. I saw something in their eyes.'” 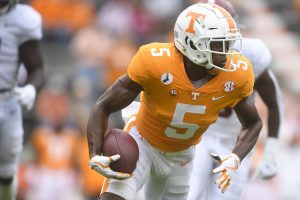 In July, Tillman was using his experience from former players to help teach the younger players in the off-season. And now, in fall camp, Tillman is drawing on the same teammates. Only this time, it’s to emulate their dominance on the field and in the locker room.

“I see how those guys did it, and they were successful,” Tennessee’s Cedric Tillman said on The Slice. “So that’s what I try to model my game after.”

Jennings, Palmer, and Callaway were all successful and beloved athletes at the University of Tennessee. And, they all went on to make it to the NFL. And now, Tennessee WR Cedric Tillman has that same opportunity in front of him.

Tillman may not enter the season returning anywhere near the most yards, receptions, or touchdowns from last season. But he does carry the most year-to-year experience in Tennessee wide receivers coach Kodi Burns’ room. And experience, especially with a new coaching staff, can often be invaluable.

Tennessee will kick off their 2021 season on Sept. 2 against Bowling Green. The season-opener will be played at Neyland Stadium in Knoxville.

Tennessee Running Back Named SEC Freshman Of The Week

Tennessee Running Back Named SEC Freshman Of The Week