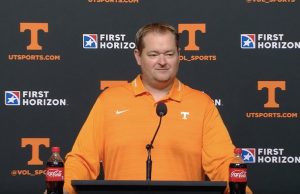 On Monday, Tennessee football head coach Josh Heupel spoke to the media after the Vols’ closed football practice. With less than two weeks until Tennessee’s opener against Bowling Green, Heupel gave an update on his team in Knoxville. The Vols have been hard at work the last month, getting in shape and prepared for the season as they learn a new system.

Over the last few weeks, there have been a lot of storylines surrounding the Tennessee program. Questions regarding the quarterbacks, the linebackers, vaccinations, and much more have swirled around Tennessee’s campus for weeks. But through it all, the team has continued to wake up each morning to get better and more prepared.

Heupel spoke to the media on Monday about some of those essential topics.

Stay tuned to Rocky Top Insider for more Tennessee Football coverage. You can check out footage and observations from Tennessee’s fall camp, as well as a variety of other Tennessee-related topics.