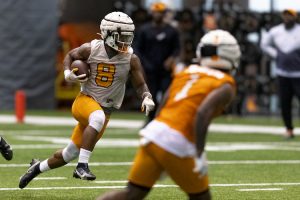 Running back Tiyon Evans #8 of the Tennessee Volunteers. Photo By Andrew Ferguson/Tennessee Athletics

The group of Tennessee running backs heading into the 2021 season have had quite an impressive fall, according to Tennessee offensive coordinator Alex Golesh.

Head coach Josh Heupel and coach Golesh will continue to evaluate their players and tweak their lineup until game day, including the running back room. Although, for a group looking to replace Tennessee’s top two rushers on the 2020 team, the Vols’ backs are eager and ready for their opportunity.

Tennessee currently has ten running backs on the roster. Although, only about a handful of them will work into the offense. Sophomore Jabari Small, junior Tiyon Evans, and true freshman Jaylen Wright have been among the most talked-about names this fall. On Wednesday, coach Golesh discussed his thoughts on the running back room as a whole and some of the players individually.

“(They’ve) done a really good job of figuring out the scheme,” Golesh said about the running backs on Wednesday. “I think Jerry Mack (and) Matt Merritt, those guys have done an incredible job teaching those guys. That’s one position that I’m uber excited about going into game day.”

Jabari Small returns to the roster from the 2020 season, in which the true freshman played in all ten of Tennessee’s games. He will likely work in tandem with Tiyon Evans, a transfer player from Hutchinson Community College in the JUCO system. In addition, Hutchinson CC also produced Tennessee greats Cordarelle Patterson and Alvin Kamara.

Running back Jabari Small of the Tennessee Volunteers. Photo By Caleb Jones/Tennessee Athletics

“Jabari (Small) has had the camp we all hoped he would,” Golesh said. “Tiyon (Evans), honestly in a lot of ways has surpassed my expectations. He’s started to figure out what it is to be a Division I college football player.”

Coach Golesh then explained further what it meant to be a Division I college football player in his mind. And how Evans has approached the challenge this fall.

“He was here in the spring,” Golesh said about Evans. “I’ve recruited junior college my whole career – you come in from a junior college, and it just hits you in the face, and it took him a while to figure it out. It really did. From how to take care of my body, how do I sleep, when do I go to tutoring? All of that, just how do I figure that out? It took him a minute (and) he was resistant a little bit at times to figuring it out. There was some nudging there. But I think time has put it all together. Having only football for three weeks for Tiyon was really, really good. I’m excited to see what he can do. He’s a different back than those other guys in the room. He’s a bigger back, been really pleasantly surprised with him.”

Next, Golesh spoke about true freshman Jaylen Wright. It was easy to tell that Golesh has been impressed by Wright’s high motor in practice, even if he is still trying to catch up to speed in some departments. In the same way that Evans is transitioning from JUCO to D-I, Wright is making the same transition, except coming from high school.

“Jaylen Wright, man oh man, really excited about Jaylen,” Golesh said. “He is everything we had hoped he would be—still a freshman, same sentiment as Miles Campbell. Now we just threw class on him. We threw the distractions around campus at him. He’s got to learn and grow, but I think he’s got a really, really bright future.” 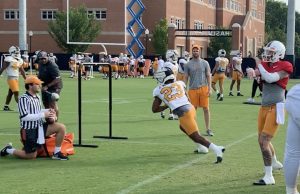 Earlier in the press conference, Golesh talked about freshman TE Miles Campbell. While doing so, Golesh mentioned that he has hope that the freshman tight end will contribute to Tennessee this season. However, he still has a lot to learn and process first. Therefore, Golesh said he doesn’t “know how early that’ll be in the season.” However, based on his comments at the press conference, it seems like Golesh is looking at Wright through the same lens.

There are a few more names on the Tennessee roster that have made some noise during fall camp. Plus, questions continue to arise about players like Dee Beckwith or Tee Hodge and how deep Tennessee is willing to go into their running back rotation this year.

“The other guys in that room, with Marcus (Pierce) and Dee (Beckwith) and those guys, we’re still figuring out how the rest of that back end of that rotation shakes out,” OC Alex Golesh said on Wednesday. “I think it will truly be by committee on the back end of it, and I think it will be by committee on the front end of it. We really need four guys ready to rock n’ roll Sept. 2. Obviously, those guys get nicked up as the season goes, COVID is a real deal right now, we got to have five to six of those guys ready. I’m excited about the three.”

It still isn’t known how exactly Tennessee plans on using their running back rotation in 2021. Like most things with the team in the inaugural year, some of it will wind up as more trial and error as the season goes on. But, with all that said, there is only one week remaining until the Tennessee season opener against Bowling Green. And Alex Golesh does seem to be somewhat genuinely excited about the potential from the running backs.