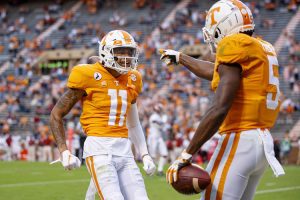 The Tennessee Volunteers will host the Bowling Green Falcons Thursday night at Neyland Stadium, with the stadium open to full capacity for the first time in over a year. The Vols are the expected favorite in this matchup, both in official predictions and point spread.

Kick-off in Neyland will be at 8:00 p.m. ET, and the broadcast will be on the SEC Network. On Monday, Tennessee coach Josh Heupel announced that Joe Milton III would be the Vols’ starting quarterback.

And finally, according to Odds Shark, Tennessee is once again a 35-point favorite. However, this time, Odds Shark has gone one step further. According to their data and analytics, Tennessee projects to win the game by a score of 27.4 to 11.8. Or, essentially, 28-12.

Bowling Green is 1-7 against the spread in the last eight games, whereas Tennessee is 2-6 in that range. However, Tennessee moved on from Jeremy Pruitt and his staff this offseason, which has provided a fresh start for many players and the team as a whole.

On Sept. 5, 2015, Tennessee began its season by playing Bowling Green. The 25th ranked Volunteers ran for six touchdowns as they took down the Falcons 59-30. Jalen Hurd ran for three first-half touchdowns, and VFL Alvin Kamara added in two as well.