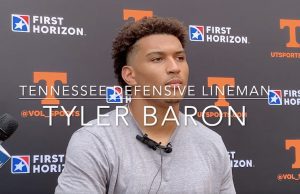 Tennessee players, including DL Tyler Baron, speaking to the media on Monday in Knoxville.

This weekend’s game against Tennessee Tech (1-1) will be crucial for the Vols (1-1). No, the Golden Eagles don’t present much of a challenge to Tennessee on the field. However, more importantly, it will be Tennessee’s final tune-up game before SEC play begins. And the Vols don’t receive any favors in that department either, opening against Florida in The Swamp.

Tennessee lost both the turnover and penalty battles to Pittsburgh last Saturday. And while there are several other contributing factors to the loss, those are two of the biggest that Tennessee can control. The Vols were battling an uphill climb on Saturday but kept knocking themselves off balance and tumbling down the hill, thanks to turnovers and penalties. However, those mistakes are something that the Tennessee players themselves know of. And, they are aspects that the team knows will be improved throughout the season.

“For me, it’s the mindset,” Baron said when talking about what changes in his preparation after a loss. “Personally, it’s eating away at me. I can’t wait to go get a win this weekend. But we are all responding well. We’re just going to come back and work this week.”

“Injuries are part of the game you know, it’s part of football,” Carvin said on Monday. “And that just keys into the guys that are behind that have to step up. Those guys have to be ready to play. Whenever your time is called, you have to be ready. It’s a key emphasis that coach Heupel and our offensive unit have made; the second and third guys have to be ready because you never know when your name and your time are going to be called. So we have to be fully locked in and focused.”