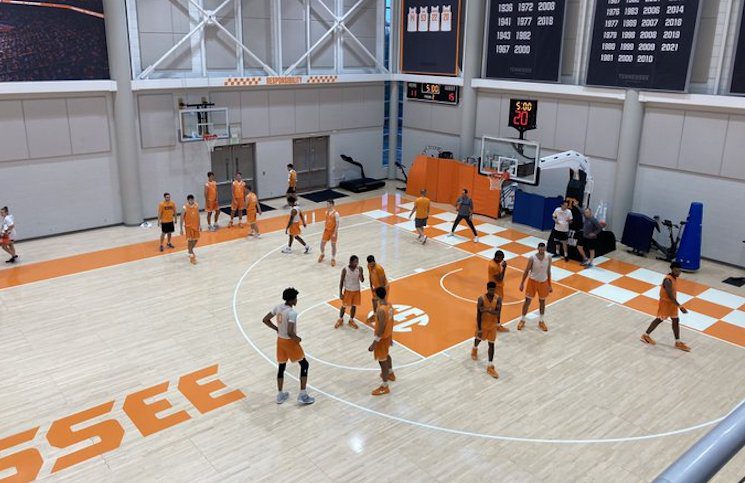 Tennessee hit the court at Pratt Pavilion Wednesday for its second official preseason practice of the 2021-22 season. Unlike football, UT allowed access to the Vols’ full practice.

With six returning scholarship players and eight newcomers, the Vols’ first team group was all returners.

Santiago Vescovi, Victor Bailey Jr, Josiah Jordan James, Oliver Nkamhoua and John Fulkerson were Tennessee’s first team at the start of practice and in the majority of sessions.

I wouldn’t read too much into these lineups. For one, we’re still nearly six weeks away from the start of the season and Tennessee worked plenty of players into both groups on Wednesday.

At the top of the list of guys that worked with both groups is Auburn transfer Justin Powell. Powell showed his shooting in the highlight video Tennessee released Tuesday, and the sophomore guard showed that in a big way Wednesday.

Powell looked like a pure sharp shooter Wednesday, hitting a plethora of three-pointers from all over the court in drills, 3v3 work and 5v5 work. That might have been my biggest takeaway from Wednesday. Powell looks like the real deal and a perimeter shooter the Vols missed last season.

With seven freshmen, learning moments are going to be frequent with this team and that was evident Wednesday. Barnes got after a handful of those players including Zakai Zeigler, Diboundje and Huntley-Hatfield. The seventh year head coach particularly got after Diboundje a couple times throughout practice.

While Santiago Vescovi is a junior, he earned a few angry outbursts from Barnes. Many of them coming from nonchalant passes.

Freshman point guard Kennedy Chandler avoided Barnes’ ire for most of practice, but earned an outburst near the end of practice for not being on the line ready to run a sprint.

Chandler showed why he was the nation’s No. 1 point guard coming out of high school. The Memphis native has elite quickness and got in the paint at a high rate Wednesday. Chandler particularly impressed on one 5v5 play where he beat Vescovi into the paint and made a crafty finish around a pair of big men. I was a little surprised he wasn’t a little more assertive on the offensive end. He’s still clearly learning what Barnes’ wants from his point guard but Chandler impressed throughout practice.

Tennessee’s other freshman point guard Zakai Zeigler impressed me too. I don’t know if Zeigler will play a massive role on this team but he was impressive with his quickness and shot making. Maybe I’m overreacting to one practice but he’s going to be a really solid multi year player and I wouldn’t bet against him earning some minutes this season.

While Chandler is expected to be Tennessee’s starting point guard this season, the battle for the back up spot is crowded. Zeigler and Vescovi worked the most at point guard besides Chandler but Powell earned some reps there too.

Josiah Jordan James had a poor shooting practice but he was the Vols’ most vocal leader throughout practice. Rick Barnes complimented his team’s leadership while meeting with the media Wednesday, saying it’s the best they’ve had in a handful of years.

In the frontcourt, Huntley Hatfield looked really solid, showing off great touch around the rim. The freshman forward definitely looks like someone that will help Tennessee this season.

I wrote Tuesday that I’d be surprised if Jonas Aidoo earns a major role on this team and I feel the same way after watching Wednesday’s practice. Aidoo worked mostly with the third team and looks like a guy who’s taking in an abundance of information and whose head is swimming.

Still, Aidoo is a great looking athlete who runs the court well and has solid touch. Adding some more strength in his upper body would be beneficial. The North Carolina native looks all of his 6-foot-11 frame.

Out of Plavsic, Nkamhoua and Aidoo— Nkamhoua appears the closest to earning serious minutes for this Tennessee team.

Former Tennessee point guard Bobby Maze was in attendance at the Vols’ practice.