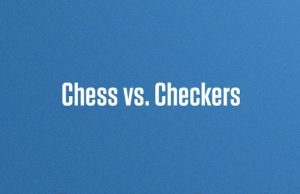 Ole Miss is using social media to troll Tennessee before their prime time game on Saturday. Photo via @OleMissFB on Twitter.

But it hasn’t just been the off-the-field events that have the Tennessee fans fired up. In the last two weeks, Tennessee’s offense has scored a combined 107 points against Missouri and South Carolina. Meanwhile, the Vols’ defense has had nine takeaways in the last four games alone. From the play on the field, to the involvement of the Tennessee crowd, there are several reasons why this game has been hyped up so much.

Over the course of the week, though, the Ole Miss Football Twitter account has decided to have some fun of their own. After the #CheckerNeyland announcement was made, the Rebels’ Twitter account was quick to react.

The Rebels went with a “chess, not checkers” approach to counteract the excitement behind Tennessee’s iconic design.

The latest Twitter trend, centering around the red flags, is essentially to name a “red flag” type of statement. In this case, Ole Miss is trolling people who say that Tennessee has a superior experience.

While it wasn’t so much a troll as much as it was strategy, former Tennessee and current Ole Miss head coach Lane Kiffin had a unique way of preparing his players for the environment on Saturday. Kiffin posted a video to Twitter of Tennessee’s song “Rocky Top” being played during the Ole Miss football practice this week.

At home in the end zone.

4 straight games with a receiving TD for @_Payton0 pic.twitter.com/s8DxQo0Hku