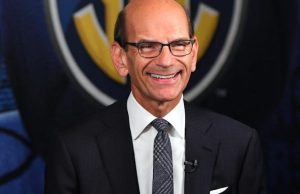 ESPN radio host Paul Finebaum did not hold back speaking about Tennessee on Sunday.

ESPN radio host and TV analyst Paul Finebaum was not happy with his alma mater on Saturday night after the Tennessee game. And on Sunday, Finebaum did not hold back any words on a national television appearance on ESPN’s SportsCenter.

Finebaum, one of the most well-known SEC analysts in the media today, was forceful with his words. The former Tennessee alumni used words such as “classless”, “unconscionable”, and “disgraceful” to describe the Tennessee fans that took part in throwing trash onto the field.

“I thought it was classless and unconscionable behavior,” Finebaum said on SportsCenter on Sunday morning. “It was an absolute disgrace. And I realize, as everyone does, in a stadium of 100,000-plus, this was not just a handful. It was maybe a couple hundred. But that’s one too many. The idea that somebody would throw a golf ball and nearly hit Lane Kiffin — bottles, mustard packages, it’s hard to wrap your arms around what a bad and ugly look that was for the University of Tennessee.”

As time was winding down in the fourth quarter, chaos broke out in a few sections of Neyland Stadium, specifically, near the student section. After the announcement that Jacob Warren’s reception was confirmed to not have reached the first down marker, some fans quickly began showing their disappointment. Pom-pom shakers were the first item to drop from the pitch-black Knoxville sky. However, soon to follow was an assortment of Dasani water bottles, crushed beer cans, and food boxes.

Additionally, the Ole Miss Rebels sideline had to shift about 10 yards onto the field for safety precautions after a golf ball was thrown at Rebels HC Lane Kiffin. Even Tennessee’s dance team and Pride of the Southland Marching Band members had to leave the area for safety.

Ultimately, the delay did not cause the end of the game and riots did not break out. After about 15-20 minutes, the game was able to resume. Students came streaming down the aisles to fill in the open parts of the stands to cheer on their team. Not only that, but both Tennessee and Ole Miss even had offensive possessions after the stoppage.

Students rushing back for one last drive after the delay. // ⁦@rockytopinsider⁩ pic.twitter.com/Libb3plgui

After the game ended and the score went final, multiple high-ranking officials did release statements on the events at the end. Tennessee Director of Athletics Danny White, Chancellor Donde Plowman, and SEC Commissioner Greg Sankey all spoke about their disappointment in the situation.

In addition, the SEC did officially release its punishment for Tennessee following the situation on Monday afternoon.

However, also on Monday, Tennessee head coach Josh Heupel spoke about the matter from the weekend. However, Heupel didn’t harp on the delay, as it was something that was out of his control as the coach. Instead, Heupel continually complimented the atmosphere and environment that Tennessee had. In terms of the recruits that were in Knoxville on Saturday, Heupel feels confident in the overall takeaway from those players visiting.

“To see our student body rush down and fill the bottom part of the section [after the delay], the remainder of our crowd being amped up for the final minute of play – That’s the takeaway,” Heupel said on Monday.