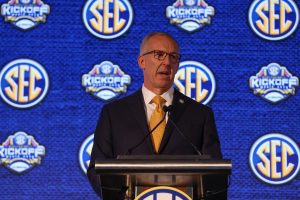 SEC commissioner Greg Sankey’s appearance on the Paul Finebaum Show on Wednesday did allow for the commissioner to address several topics regarding the league, and in specific, the sport of college football.

One of the first topics that Sankey spoke on was focused on the league’s officiating and referees. A clip, posted to Twitter by Finebaum, did show one of the statements that Sankey made. However, his full answer goes much more in-depth.

“Officiating is an incredibly difficult task,” Sankey said on Wednesday. “We should start with that as a fundamental. Second is the experience around our game is an emotional experience and people are attached to their teams. And there are going to be any number of close circumstances in a game. And depending on how you view the impact on that team is often how you view the effectiveness of the official. There are realities, so we acknowledge what was a breach of mechanics and expectations on a punt return. Not that we misapplied rules, but we had an official waving hands to kill a play and we didn’t follow through on that.”

Sankey’s punt return example was not specific regarding a certain game or team in particular.

Many spectators have been questioning the accountability of the league and its referees. The internal process is kept fairly secretive, making it tough for fans and viewers to understand exactly what is changing regarding the official’s execution of the calls for the better. However, that is an aspect that Sankey did touch on Wednesday, although, some statements have more detail than others.

“That’s not to say our officiating is perfect,” Sankey said. “But when you take the challenge of officiating and the emotions attached, people are going to have strong opinions. It is our duty to continue to improve. So we have had a change in our officiating coordinator, we have had changes in staff, and we do have accountability. What we don’t do is issue press releases every Monday and say, ‘We’re suspending or eliminating this official.’ I think that’s first disrespectful, it doesn’t make you any better, and we have been clear that our accountability is applied on an internal basis.”

Lastly, as Finebaum states before the original question, some analysts have pointed out the need for the league to have full-time referees. Currently, the officials are part-time workers. However, Sankey says that their officials have a year-round clock.

“When I look at the dedication of our officials, and I’ll speak on other conferences, the amount of time they dedicate to their craft is substantial,” Sankey said on the Finebaum Show Wednesday. “And if you take an individual, and simply make them full-time, does that really solve the dynamics of the game? So if we take a step back from the emotions, and Wednesday is probably a good day to do that, things are happening so fast on a football field. Particularly, when we see sped-up offenses that we have to encounter in college football. That makes [official’s] decision-making even more demanding. It has to happen more quickly. The evaluation points are still the same, just in a compressed period of time. So we have to adjust to that. Having full-time employees doesn’t solve that reality.”

Sankey referring to the league official’s difficulty in adjusting to the up-tempo speed of the game is not great news for Tennessee. The Vols, who have consistently been running a Top-5 fastest offense in the league this year, are one of the exact teams that Sankey is referring to. But one thing is clear- the adjustment from the league has to happen quicker and with more force. Tennessee isn’t the only fast team in the SEC as they are often competing with Ole Miss for the top spot. But regardless, in order for the SEC to maintain their level of play on the field, adjustments have to be made quicker.

Players and coaches have to adapt to new rules, new procedures, and new guidelines all the time. And they do so instantaneously, knowing the effect it will have on the outcome of the game if they don’t. Whether they are internally done or not, the SEC’s officials should be expected to adapt to changes in the game (in this case, up-tempo offenses) as quickly as players are expected to follow new rules during play. While they aren’t the same in comparison, one for one, the sentiment still rings true. Sankey saying that the SEC has to “adjust to that” could imply that they have not already, even though, realistically, they probably have to some degree.

Additionally, Sankey also spoke directly on the delay incident that took place between Tennessee and Ole Miss from mid-October. Sankey had strong words regarding the delay, Vol fan’s behavior in Neyland Stadium, and his right to remove alcohol from stadiums.