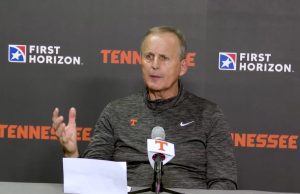 Tennessee head coach Rick Barnes and the Volunteers won their first exhibition game of the fall on Saturday afternoon in Knoxville. While it wasn’t the regular-season opener, it was a great chance for Tennessee’s newcomers to debut in a Tennessee uniform in front of the fans.

Tennessee took down Lenoir-Rhyne by a score of 103-62 inside of Thompson-Boling Arena. Three of Tennessee’s newcomers, Kennedy Chandler, Brandon Huntley-Hatfield, and Justin Powell ended up being Tennessee’s three leading scorers on the night. The three players scored 21, 15, and 14, respectively.

After the game, Barnes spoke about several topics regarding the game and Tennessee’s team. He spoke about the Vols’ shot selection, as well as his thoughts on Tennessee’s freshmen and where they can improve before the season begins.

Additionally, Chandler, Huntley-Hatfield, and Powell spoke to the media after the game as well.

On his overall impression of the team and their execution…

“I do think our older guys did a nice job with the younger guys to try and get them to understand our preparation, a couple days out, and gameday. This is the first time that we really got to do what would be a normal gameday. A week ago when we went against Davidson, it was not quite the same. Plus this was the first time they had a chance to play in front of people, which was a great feeling to be back in Thompson-Boling. That was a neat part for them. The fact is I thought overall there were some good things. Obviously, people have talked about shooting a lot of threes, and we worked all year on taking open shots. Today we were good, with exception of maybe three of them that I think I looked at the coaches and went, ‘that’s not a good one.’ There were some good things defensively. We got to be more active, we got to come up with more deflections, we got to do a better job of guarding the ball one on one. Give Lenoir-Rhyne credit, they spread you out. At times they had about four or five guards out there it seemed like. They were really opening the court up. They move, they cut, and rebounds are a big thing that we talked about, and I think they had seven offensive rebounds. I’ll be surprised if a majority of those didn’t come from our guards not blocking out. I know right off the top of my head about three or four of them did, because we were running the other way without securing the ball. Overall, I think everybody had good moments. A couple guys we expect a little more from, but overall, it was good for us.”

“I had thought in the past that we had guys that refused to shoot it when they were open, and the fact is when you refuse to take open good shots normally that possession ends up getting your back against the clock and normally good things don’t happen. (Our guys spend so much time working on their shooting). We stat it every day, and our players understand where their shots are coming from. We want them to take open shots, we want them to. But we also feel that by doing that, it’s going to give us a chance. We have some guys that we think have the speed to drive the ball and get into those cracks. We think we are going to continue to get better with our inside presence. We played today without John Fulkerson, who with him, we do some things differently—some but not a lot. I’ll think he’ll benefit from this. We missed Yves Pons today. We missed his defensive fix-it plays. We did miss that. We need to keep working on getting better. But we played ourselves twice in a 40-minute game, we played Davidson and then we played ourselves, and in all four of those games we shot over 40 threes. We shot it at a clip of 40 which is about where we’ve been. We haven’t been under 40.”

On Brandon Huntley-Hatfield’s expectations for games, and if his performance will be different from practices…

“I’ll tell you he surprised me today a little bit. I wasn’t sure what to expect. There is no doubt that Brandon in the last two weeks has taken a giant step. He really has, he’s taken a giant step in terms of understanding more. He’s a guy that I’ll be disappointed if he doesn’t get better and better each day. But the fact that he’s a terrific passer, he has great feet, really sees the court. He really wants to pass the ball, maybe to a fault. He made a couple really nice moves—he’s so big and strong that when he gets it going towards the basket, he’s a hard guy to defend just because of his soft hands. But for him, getting his hands on a lot of balls was great today. You know what, he was locked in more defensively than I kind of thought he would be. This being the first time out and playing. Both he and Kennedy, they’re going to have to continue to really get themselves in elite shape to be the kind of players they want to be. What that means is can they work harder? I’m not sure they can really work any harder than that. They have to get there mentally where they understand they can fight through it. That’s going to be the next step when they think they’re tired when I know that they have conditioned well enough not to be as tired mentally as they think they are. That will be the next step for both of those guys.”

On Kennedy Chandler’s demeanor at his age…

“He sees it and he does that in bursts. He has a burst. I would tell you, I was on him today about more defensively. I think he could be a great on-ball defender. He certainly, like most young guys, has to continue to learn to get better away from ball. Today we had him in a situation at half court in the first half, he led his guy, he was way overzealous and let a guy back cut him from 40, 45 feet. He wants to learn, he’s constantly asking me questions about ‘what do I need to do.’ You’re right about he has a feel, he’s got a great burst of energy. As he learns to control his speed and his pace, we often talk to him about the difference between driving on the freeway and driving in New York City. You’re going to have to figure out the two of them at times. He’ll get that, he’ll get it, but right now he’s somewhere in between.”

On the best 3-point shooters in the preseason…

“One of them, Santiago (Vescovi), didn’t shoot it well today. Overall, from the beginning of the shot charts Zakai (Zeigler) is one of them. Zakai (Zeigler) was a little anxious today, which you can expect, but he can shoot it. To be honest with you, they all put big numbers up. The one who has been under what we expect is (Jahmai) Mashack, and he raised up and hit one today. He’s improved his shot a lot but they’re all very consistent. Victor Bailey too, we have a couple of different drills, he’s had somewhere he makes 87 out of 100 in our ball 100 shooting. Consistently guys are around 75 or 80. It goes back to having feet set—Josiah (James) dropped the ball one time today, he shouldn’t have shot that one. Even though we think that every time it leaves his hands, it’s going to go in. If you look at the chart, they’re all ranked right up there together.”

On benefit to Brandon Huntley-Hatfield having soft hands…

“It’s a great advantage when you have big guys that can pass the ball. Uros (Plavsic) does a good job as well getting out there when he slows down and sees it. But Brandon loves passing, and Uros, those two guys really do love passing the basketball. I actually heard Brandon telling the guys, ‘if they want to double team me, I’ll find you”. You said it, he has soft hands. I just think he has to continue to build his game with the ball if they don’t come double team. Otherwise, he really sees the court and you asked if it’s an advantage any time you have post guys who can pass the ball—It’s a huge advantage having guys who can move and get their hands on it.”

On what he learned about Tennessee’s rotation…

“We kind of went in somewhat with a set pattern that we thought we’d try to move some guys around. I don’t know if I can tell you about what we found out about our rotation yet. It’ll get back to consistency and guys doing the detailed things. I held back today, I normally would pull guys really quick for rebounding. We’ve talked about it so much. Quentin (Diboundje) went in the game and right off the bat, there was a long rebound where he was already heading the other way. It should’ve been his rebound. Those are the plays that will determine guys playing because we talk about every possession matters, every possession. We’re not afraid to put guys out there because we have a group of guys who do the work daily. There’s not one guy in our program that doesn’t work, and there are guys that work harder than others, absolutely. But there are guys we are trying to get up to that, we are. How deep we go and whatever rotation we fall into, our players will determine that. They will determine that based on consistency, what we know we’re going to get when we go out on the court, but there is a role that each one of them can start to play to get minutes.”

“The players, but there is no doubt it would’ve been a little bit different with John Fulkerson in terms of playing through there a little bit. We’ve always tried to score in transition, we really have. To answer your question, when it gets going people will know that we’re willing to shoot. We had some great looks today, and I think Lenoir-Rhyne’s whole game plan was to force us into that. I told our coaches as the game was going on, in the past, we would’ve been trying to be stubborn say ‘pound it in there, pound it in there and it would have gotten ugly because there wasn’t a lot of space inside the way we like to pass and get in there with it. By shooting the ball, I think our offensive pace can wear on people now even more so. It’s a combination of the fact that I think we have guys who can shoot the ball, yes, but I’m also aware that when people find out what we know, how well we shoot it, they’re going to extend out there. So we’re going to have to work harder and drive the ball a little bit more, which I think we have guys who are willing to do that too. We just want the simple A to B passes, nothing complicated. Let’s get the best look that we can get and if it comes early in the clock, we are going to take it.”