The Knoxville Super Regional is officially in the books. Tennessee’s team is starting the offseason, while Notre Dame is gearing up for a trip to the College World Series.

There will be a lot of talk in the next week or so, particularly from Rocky Top Insider, breaking down the Vols’ season, the SEC Tournament, the postseason, so on and so forth. However, in the immediate aftermath of Tennessee’s season, I want to take a look at the city of Knoxville.

The city of Knoxville brought a literal outpouring of support to Tennessee’s team all season, but especially in the Super Regional tournament. As in the fans poured out of the stadium to the extent that Tennessee had to open up a block party next to the fraternity houses to contain the overflow of people. Let’s put it this way. There were countless, and I mean countless people standing up in the walkways of Lindsey Nelson Stadium just to see a glimpse of the action inside the park. If I had a nickel for every time I heard a security officer remind someone to keep the walkway clear, without much success I might add, I would be rich. 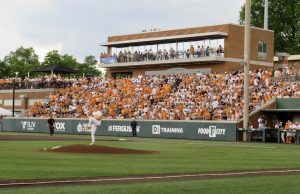 If you walked by Lindsey Nelson Stadium at about 4:00 a.m. on Sunday morning, you would see a group of college students camping outside the stadium just for the chance of being in the front row of the student section. The students were loud, disruptive, and energetic all weekend – despite quality sleep, it would seem. That’s just a small look at the adrenaline boost that the baseball team gives the city.

And then you see the family atmosphere. You see little kids sprinting around the fields doing their best Drew Gilbert impression. Emphatic and authoritative bat flips seemed like a requirement for anyone under the age of 10 that was playing whiffle ball near the stadium. You see boys and girls lining up at the player’s gate, an hour after the game ended, to get an autograph from their favorite Tennessee player. Heck, there was even a time when a small boy ran up to me as I was walking to the media tent after the game on Saturday, hoping he may have just sneakily found a Tennessee player in street clothes.

A kid said to him, “Thanks for a great season, Tony.” pic.twitter.com/9jVi6IdPSq

If you aren’t connected with the Tennessee team, you may be prone to buy into the anti-Tennessee storylines. Yes, this is a team that plays with its emotions on its sleeve, isn’t apologetic, and won’t back down from anyone. No, they are not a passive team and will say what’s on their mind. But those things don’t come from spoiled rotten attitudes and they aren’t indicative of something that is bad for the sport. Tennessee’s antics come from passion – for the team, for the fans, and for their city.

The college baseball world is already saying that “no one deserves this pain more” than Tennessee fans. That’s the narrative entering the week after Tennessee’s loss. But that’s wrong and, frankly, Knoxville shouldn’t care.

Some will scream from the rooftops that Tennessee plays the game the wrong way. Some will argue that Tony Vitello’s hot-headedness is a bad trickle-down effect for his team. Some will say that Tennessee’s in-your-face personality is bad for the game of baseball.

Considering Tennessee baseball was an afterthought 5-10 years ago, I would disagree wholeheartedly.

As a freshman at the University of Tennessee in 2015, I remember sneaking into Lindsey Nelson Stadium with my Reece Hall roommate on a random fall school night, simply because we could. We didn’t open any closed gates, nor did we jump any fences. We simply just walked into the ballpark. We kept walking and eventually made it into the locker room with no trouble. Fast forward seven years to 2022, where Lindsey Nelson Stadium was the home of college baseball’s best team and is now planning on undergoing renovations to make it one of the most standout stadiums in all of college baseball. College freshmen sneaking into Lindsey Nelson in 2022 and beyond? Forget about it.

As sports so commonly do in Knoxville, the Tennessee baseball team’s 2022 run united different sections of the Tennessee fanbase and helped build one of the most undeniable runs in the history of college sports. Little kids will be taking the field all summer trying their best to emulate Jordan Beck’s swing or Ben Joyce’s fastball. And come next season? The fanbase will be right back where they were when the 2022 season ended.

The college baseball world may not like Tennessee, but the city of Knoxville loves their Vols.