The six-year career of Redmond Walsh at the University of Tennessee is now in the books.

The Louisville, Tennessee native first stepped onto Tennessee’s campus in 2017 and ended up taking a redshirt season that year. From that point on, excluding the shortened 2020 season, Walsh never had less than 16 appearances in a year.

In his five years pitching for Tennessee, Walsh ends his Tennessee career with an impressive 1.93 ERA and a 12-5 win/loss record, while batters only hit .215 off him. Additionally, the University of Tennessee graduate received his bachelor’s degree in Aerospace Engineering from the Tickle College of Engineering in May of 2021 and earned his graduate certificate in Engineering Education in May of 2022.

On Monday, Walsh posted a goodbye message to the Tennessee coaches, players, and fans on his Instagram page:

“Thank you! To all my teammates, coaches, friends and Vol Nation, I can’t thank everyone enough for the constant support and love you all have shown me. These last 6 years on Rocky Top have been the best 6 years of my life. Even though I don’t know exactly what my next steps are going to be, through prayer and guidance from the amazing people God has put in my life, I know I will be in the perfect situation. Through everything, I’m happy that I can say my teammates and I have left an everlasting impact on Tennessee Baseball and hopefully on Tennessee fans. So again, to everyone who followed me along for the ride, Thank you and go Vols! -Scarfy”

The comments from the post, which feature an outpouring of encouraging and thankful messages, do include a ton of current and former Tennessee players that played with Walsh.

“Love you Red,” said VFL Chad Dallas. “Thank you for everything!”

“The one and only rabbit,” said Tennessee first baseman Luc Lipcius.

“Such an amazing person,” wrote VFL Garrett Stallings. “Wishing you the best Red.” 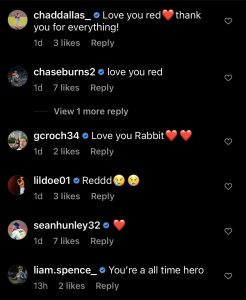