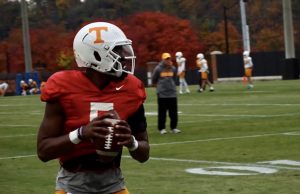 With less than a week until the start of the 2022 season, Tennessee quarterback Hendon Hooker has been selected to a fifth preseason watch list.

After a productive first season in Knoxville that saw him finish the year as the SEC’s highest-rated quarterback, Hooker has been collecting several watch list recognitions leading into the year. As mentioned earlier, Hooker has been named to five award watch lists so far:

Hooker has also been named to an All-SEC preseason team by four publications. The second-year Tennessee quarterback has been named an All-SEC second-team selection by Athlon Sports, Phil Steele, the media, and the coaches.

In his first season with the Volunteers, Hooker was surgical as he ended the year with 31 touchdowns to just three interceptions. Hooker took the starting quarterback role from the bench and week three and still had more than enough ability to grab control of the offense and turn it into a high-powered scoring machine. The Vols finished the 2021 season with the 9th most points scored in the country.

Hendon Hooker and the Tennessee team have been working hard in the month of August to get ready for the reason. It’s easy to tell when watching practice that Hooker looks more relaxed with his teammates and coaches, yet more confident and locked in on the field at the same time.

“He’s doing a much better job than early last year keeping his eyes down the football field,” Tennessee HC Josh Heupel said about Hooker during training camp. “You guys have probably seen it out at practice. We’ve put a huge emphasis on when he breaks the pocket, it being a pass play, not a run play. Our guys understanding out on the perimeter where they need to get open, understanding space and how to function once the original play call breaks down and you go into the second design of the play. That can and needs to be a big part of our game. There are going to be times where he pulls it down too and he’s got to do a great job with his feet, take care of the football and make sure that we’re continuing to get to the next set of downs but also take care of himself, too.”

Tennessee and Hendon Hooker will open the season against Ball State this Thursday, Sept. 1, at 7:00 p.m. ET.