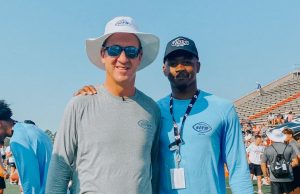 The Manning Award is the third high-profile preseason watch list that Hendon Hooker has been named to leading into the season. The Tennessee quarterback is also on the watch lists for the Davey O’Brien Award and the Maxwell Award.

Entering his second season in the Josh Heupel system, expectations are high for Hooker. The Tennessee quarterback is coming off of a notable year in which he went from backup quarterback to the SEC’s most efficient quarterback, all in the first year of a brand new coaching staff following a transfer from Virginia Tech. To say that Hooker has the mental strength and toughness that it takes to be a signal caller in this league would be an understatement.

Now, Hooker leads a Tennessee team that has an offense on the map of college football, and with that comes raised expectations.

In his first season with Tennessee, starting 11 games but playing in all 13, Hooker ended the year with 2,945 passing yards, 31 touchdowns, and only three interceptions on 206 completed passes. Hooker was magnificent in leading Tennessee’s up-tempo offense and had the wherewithal to push when needed.

Heading into 2022, a lot of pieces will be back in place for Hooker behind center. Tennessee still has the same offensive coordinator calling the plays, and Hooker will have four of his five starting offensive linemen back in place after Cade Mays’ departure into the NFL this offseason. Additionally, with Velus Jones Jr and JaVonta Payton going the same route, Tennessee will be looking for two starting wideouts to emerge from those spots and join Cedric Tillman as the heavy hitters of the offense.

As far as the running back room goes, it will be the same two guys starting the season that ended the season last year: Jabari Small and Jaylen Wright. As of Sunday night, transfer running back Lyn-J Dixon is no longer on the team, and the Vols are still without Len’Neth Whitehead who was lost to a season-ending injury. That means Tennessee’s two freshmen backs, Justin Williams-Thomas and Dylan Sampson, will almost certainly be called upon at various points in the season.

Going back to the quarterback, though, all of the assistant coaches have been raving about Hooker’s improvements over the offseason. Tennessee’s next task is turning that offseason improvement into more in-game success.

Tennessee and quarterback Hendon Hooker will open the season on Sept. 1 against Ball State in Neyland Stadium.