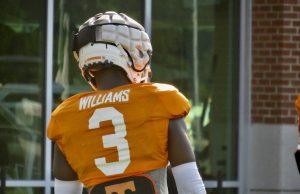 After cycling through several different players and distributing reps during training camp, it looks like Tennessee is zeroing in on who will replace Velus Jones Jr as far as Tennessee’s kick return responsibilities go.

On the first Monday morning of the season, Tennessee officially released its week one depth chart.

“We’ve had a ton of guys on punt return,” Tennessee special teams coach Mike Ekeler said during training camp. “We’ve had Trevon Flowers, we’ve had Dee Williams. Kickoff return – Jimmy Holiday, we’ve got [Dylan] Sampson back there, we’ve got Niko (Doneiko Slaughter). We’ve got a bunch of guys and a lot of guys that are capable. Really excited about it.”

Just about two weeks later and it looks like the first three names that Ekeler mentioned have stayed the standout three.

Velus Jones Jr accounted for 18 of the 26 punt returns for Tennessee last year totaling 272 yards. Additionally, Jones Jr took 23 of the 32 kickoff returns for a total of 628 yards and one touchdown. With Jones Jr being named the Co-SEC Special Teams Player of the Year at the end of last season, Tennessee does have some big shoes to replace.

More from RTI: ‘I Can Brag About Bru All Day’: McCoy Drawing Praise After Receiving Eligibility

On the kick return side of things, Holiday did have the second most returns on the team last year. Holiday had five kick returns for a total of 126 yards. In fact, Holiday’s 25.20 average return is just 2.1 yards shy of Jones Jr’s average.

Dee Williams transferred to Tennessee from East Central Community College where he lead the NJCAA in interceptions and had the second-most pass breakups on the team. As a kickoff returner, Williams totaled 13 returns for 304 yards and an average of 23.4 yards per return. As a punt returner, Williams had three last year and scored a touchdown on one. Williams found 152 yards on his trio of punt returns and broke off an 81-yard return for his season-long.

Tennessee senior and defensive leader Trevon Flowers is also listed as a potential punt return option. Flowers only had three punt returns last season which went for a total of -2 yards, so it’s safe to say that there’s only room to go up.

Tennessee will open the season this Thursday night at 7:00 p.m. ET against Ball State in Neyland Stadium.