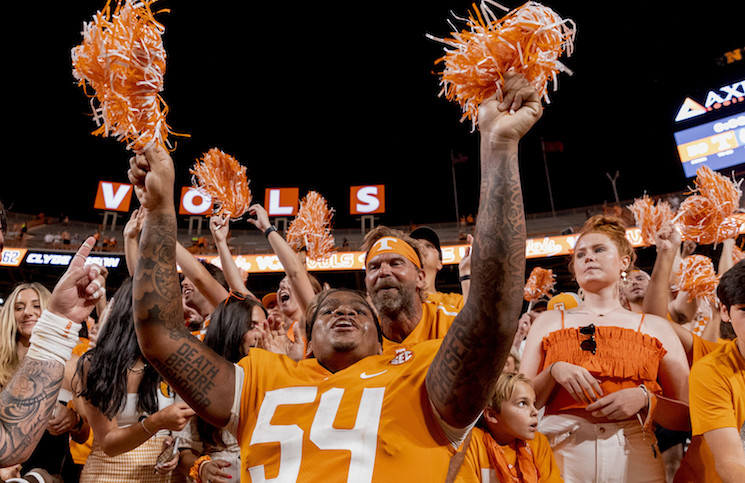 Tennessee’s left tackle battle was one of its biggest position battles throughout fall camp. Florida transfer Gerald Mincey and former junior college transfer Jeremiah Crawford battled  for the starting job with neither winning the position in the 15 fall practices.

Vols’ head coach Josh Heupel said the competition would continue into the season. Heupel was good to his word in the season opener when Mincey earned the start and played 47 snaps while Crawford came off the bench early to play 35 snaps.

That changed in week two against Pitt when Mincey played all 79 offensive plays and Crawford didn’t see the field.

“I think he’s really learned better than you could ever ask a first-year guy to do so. But really pleasantly surprised, and honestly needed it to happen in terms of him or JJ (Crawford), or both, being able to hold that down over there. So really, really proud of him.”

How did Mincey perform in his first major test as a SEC left tackle?

The results were mixed. Mincey graded out with a 51.9 PFF grade which was the second lowest of any Tennessee offensive lineman.

More From RTI: Hyatt Explains Why Tennessee Plays So Hard For Heupel

While Tennessee would like to see Mincey run block better, his ability to protect Hendon Hooker’s blindside is his most important task. As a redshirt sophomore playing his first collegiate football, Mincey’s performance has been strong.

So is Tennessee’s left tackle battle over? Is Mincey the Vols’ guy on Hooker’s blindside?

Heupel says not so fast.

“Just the way the game unfolded this week,” Heupel said of Mincey getting every snap. “We believe in J.J. (Jeremiah Crawford). He’ll have opportunities and will be a big part of what we do offensively.”

Still, it’s extremely telling that Mincey started the first game of the season and that Tennessee’s coaching staff trusted him to play every snap in a close game against a strong defensive front.

If Mincey continues to play well it’s hard to see him not playing the vast majority of snaps at left tackle.

“They’re going to keep competing just like at every other spot,” Golesh said. “That’s not a coach cliche answer, either. How you practice is how you play. Those guys have got to continue to practice their tails off. And through two weeks, he’s (Mincey) done a really good job.”

There will be plenty of opportunities for both Mincey and Crawford to play this week as the Vols opened as 50-point favorites against Akron. Kick off from Neyland Stadium is at 7 p.m. ET Saturday.