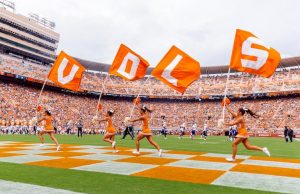 It won’t just be the first Saturday home game of the season when the Vols host Akron this Saturday night in Neyland Stadium… it will also be the season debut of Tennessee’s orange britches.

On Wednesday evening, Tennessee officially announced its uniforms for the Akron game on social media. Tennessee will be donning their traditional white helmet with an orange Power T decal on the side, along with the traditional home orange jersey and matching orange pants.

Tennessee wore the all-orange combination three times at home last season: vs Pittsburgh, vs Ole Miss, and in the regular season finale against Vanderbilt.

The Vols opened the 2022 season with the classic orange jersey and white pants look in front of their home crowd against Ball State. One week later, in Tennessee’s first road game of the season against Pitt, the Vols wore their all-white “Stormtrooper” look.

Now, for their week three matchup against Akron, Tennessee will be in the all-orange uniforms.

With the all-orange combination coming on Saturday, Tennessee will have worn three of its six uniform combinations. Tennessee has yet to wear the white jersey and orange pants on the road and still has the alternate Dark Mode and Smokey Grey uniforms on the shelf for some later time this season.

No. 15 Tennessee will host Akron this Saturday night at 7:00 p.m. ET inside Neyland Stadium.

(Side note: Did any former NCAA 14 video game players jump at the theme song used in Tennessee’s video?)