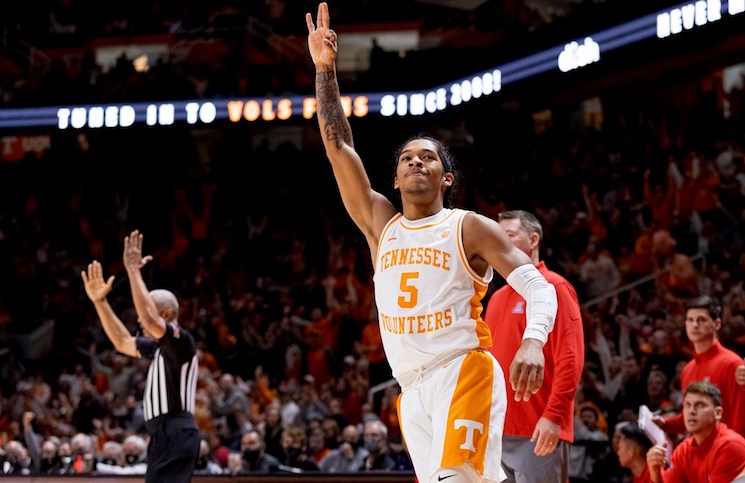 No one will wear the No. 5 Tennessee basketball uniform again after the Vols announced they’re retiring Chris Lofton’s jersey on Jan. 14 against Kentucky.

Well, there’s one last player that will wear the No. 5 uniform. Sophomore guard Zakai Zeigler will continue to wear the No. 5 jersey that he wore as a freshman for the entirety of his Tennessee career.

Tennessee announced that Zeigler would keep the jersey number in a fun video including Lofton Friday.

“So, what this mean for me?” Zeigler asked Lofton.

“Man, you know what? I like the way you play. You represent No. 5. Keep wearing it until you’re done,” Lofton responded.

In case y'all were wondering pic.twitter.com/XBKg5mAu3A

Zeigler certainly represented the No. 5 jersey well in his first year in Knoxville. The five-foot-nine guard earned All-SEC Freshman and All-SEC Defensive honors after averaging 8.8 points, 2.7 assists and 1.7 steals per game.

In fact, a number of Vols have represented the No. 5 jersey well since Lofton left Knoxville. Admiral Schofield and Jarnell Stokes each earned All-SEC honors while wearing the jersey.

However, no one represented the No. 5 jersey as well as Chris Lofton. The undersized shooting guard thrice earned All-SEC honors, twice earned All-American honors and was the 2007 SEC Player of the Year.

Lofton is known best for his incredible three-point shooting. Lofton is still the program’s single season and career three-point record holder and hit an abundance of big shots in his career.

“It’s remarkable what a legacy Chris left here at Tennessee,” Tennessee head coach Rick Barnes said. “Since I’ve been here, I can’t count the number of fans who have told me Chris Lofton stories. And I know all too well the type of shot-maker he was in the game’s biggest moments. He’s extremely deserving of this prestigious recognition.”

Tennessee is retiring Lofton’s number for this year’s Kentucky game. Despite earning Mr. Basketball honors in the Bluegrass State, Kentucky and Louisville never offered the Maysville, Kentucky native. Lofton made the Wildcats rue that decision his whole career, including a 31-point performance that propelled the Vols to a win in Rupp Arena.