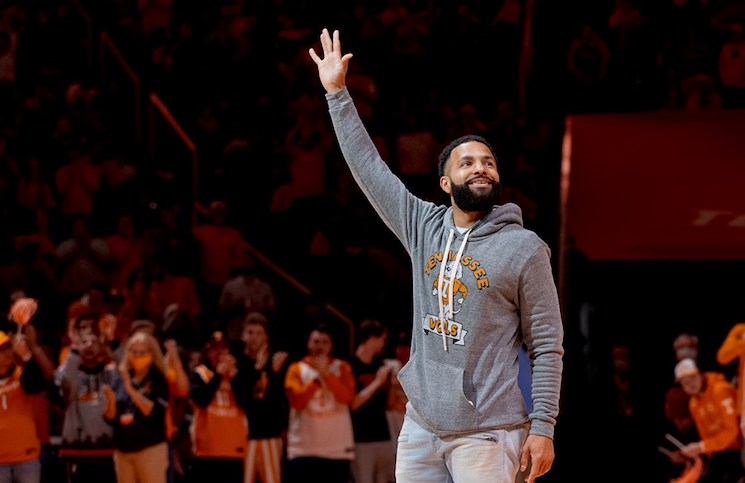 Tennessee is retiring Chris Lofton’s No. 5 jersey on Jan. 14 during the Kentucky game.

Rick Barnes, ever the jokester, had a little fun with a drawn out announcement informing Lofton of the news during Tennessee’s practice Thursday.

The eighth-year head coach discussed the challenges of being a main offensive threat on a basketball team when opponents scout you. Barnes then brought Lofton over to ask him about his mindset as being a No. 1 offensive option that teams game plan against.

Barnes asked Lofton about a handful of his iconic shots in Knoxville, including his deep triple over Kevin Durant that gave Lofton and the Vols a win over Barnes’ Texas Longhorns.

Barnes then asked the leading question, “Have you ever thought what it would be like to someday se your number up there?” while pointing to the rafters.

Lofton soon caught on to what the question and conversation meant. The Maysville, Ketucky native will forever be immortalized as a Volunteer basketball great.

Few deserve the honor more than the star shooting guard. One of the best shooters in SEC history, Lofton thrice earned All-SEC honors, twice earned All-American honors and was the 2007 SEC Player of the Year.

Chris knew something was up… pic.twitter.com/iiPbLHf2F0