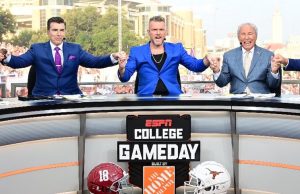 College GameDay will return to Knoxville this week for Tennessee/Florida. Photo via @CollegeGameDay on Twitter.

It’s official! ESPN’s College GameDay is heading to Knoxville for the Tennessee/Florida matchup this Saturday afternoon.

College GameDay made the announcement through an electric video on social media Sunday morning.

For the first time since 2016, we are headed to Knoxville to see @Vol_Football take on @GatorsFB. pic.twitter.com/aT6DB4ydOW

College GameDay host Kirk Herbstreit acknowledged the game on Twitter after the announcement was made.

“Bear & I started on the show the same year,” Herbstreit tweeted. “Our first experience on [GameDay] at an SEC game was Manning & the Vols hosting Spurrier/Wuerffel & the Gators – 1st of many. So PUMPED to get back to this passionate rivalry @chrisfallica See ya Saturday!”

This will be the first GameDay appearance at Tennessee since the Vols’ 2016 matchup against Florida. Ironically enough, that is also the only win Tennessee has over Florida in the last 17 years. The Vols are certainly hoping that GameDay can bring some of that 2016 magic when they come to town this weekend.

For anyone unfamiliar with the event, College GameDay is a Saturday morning preview show that is a staple of a college football weekend. The show visits different campuses around the nation in search of the best matchup each week.

“ESPN’s College GameDay Built by The Home Depot is college football’s premier pre-game show,” ESPN’s website states. “Entering its 36th season, the show travels to a different college campus or game site each week of the season from early September through the College Football Playoff National Championship in January. The locations – usually announced a week in advance – are chosen by ESPN based on competitive matchups, rivalries and other factors.”

College GameDay won’t be the only event going on in Knoxville that day, though. Tennessee has also officially announced the return of Checker Neyland for the Vols’ game against the Gators.

Tennessee will host Florida this Saturday afternoon at 3:30 p.m. inside of a sold-out Neyland Stadium.

Stay tuned to Rocky Top Insider for more information on the GameDay broadcast and setup throughout the week.