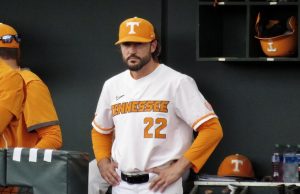 ESPN’s College GameDay is heading to Knoxville, Tennessee this Saturday!

After the announcement was officially made on Sunday, the internet immediately began buzzing about who Tennessee’s guest picker would be.

College GameDay always has a guest celebrity to join the cast for a segment near the end of the show to pick the upcoming games of the day. Now, usually, that guest celebrity has a strong tie to the University where the show is being held at. Sometimes, like in the case of Jack Harlow in week one, that’s not the case.

Regardless, it seems likely that ESPN will choose someone with strong Tennessee ties this week simply because of the long list of people to choose from.

From legendary musicians to former Tennessee athletes and everything in between, here are my own best guesses for who College GameDay may select as the official Tennessee picker. It is worth noting, though, that nothing has been announced or hinted at, at the time of this publication. Nor is this list in any particular order. Essentially, here are nine names that I have come up with that I think *could* certainly wind up as College GameDay’s celebrity picker.

Now, there’s a lot to go on here! First and foremost, let’s be fair, Randy Orton will not be the GameDay picker. Unfortunately, we won’t see Kirk Herbstreit take a flying RKO out of nowhere. Although… with Pat McAfee being there… no, I digress.

The first three names – Parton, Manning, Vitello – seem to be the biggest three names that Tennessee fans have been talking about on social media. And frankly, if ESPN wants to go BIG in Knoxville, Manning and Parton are the only choices. Putting Vitello up there in front of the fanbase would be a surefire way to get the crowd amped up to 11, though.

What do you think? Who do you want to see as the guest celebrity picker for College GameDay this Saturday morning in Knoxville? Sound off in the comment section below!

EDIT: We asked users on Twitter to send in their suggestions after the post was published. Here’s a running list of some of the best additions!

Not my idea but I fully support it… @Candace_Parker deserves it!