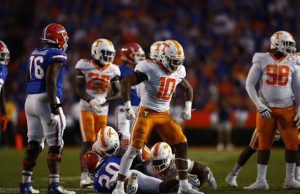 The Opponent: The Florida Gators need no introduction in East Tennessee. Steve Spurrier awoke a sleeping giant in 1990, and it’s been mostly heartbreak since for Tennessee fans. Enter Billy Napier, Florida’s fourth head coach in the last decade. Napier is trying to bring this program back to the heights of Spurrier and Urban Meyer, but it could be a steep climb after things really unraveled over Dan Mullen’s last season. This game is an opportunity for Napier’s young program to regain some momentum lost after a big opening season win over Utah. For a school with an enrollment close to 50,000 students, it is no surprise that Florida has a fair amount of notable alumni. There is no shortage of crooked businessmen and crooked politicians, but I’d like to highlight someone I actually like. Stephen Root may be one of the hardest working men in show business. The 70-year-old actor has done hundreds of projects in television and the movies. Most will know him best for playing Milton Waddams in the comedy classic Office Space. Don’t mess with a man’s stapler.

Are they any Good? Probably… but I don’t know how much it matters. The Gators are still ranked #20 in the AP poll. They looked like a Top 10 team in the win over Utah, and have looked like a team that will struggle to get to .500 since. The truth is probably somewhere in between. Florida has athletes, and their defense absolutely has playmakers. This is a really nice secondary that Tennessee will need to navigate without Cedric Tillman. Montrell Johnson Jr & Trevor Etienne are two really nice running backs. The Gators are still figuring things out in the passing game though. However it is Florida, and this is one game for Tennessee that can never be considered in a vacuum. There are years of baggage in this series, a series in which Florida has won 16 of the last 17. That history frankly outweighs whether Florida is good, great or average this year. Tennessee has played down to some really average Florida teams over the past decade. The Vols have downright imploded in a few games where they should have been competitive. Yes, Florida is pretty good but this game is more about Tennessee.

What will this tell us about Tennessee? In short, I think it will show the mental resolve of Josh Heupel’s program. These players don’t live in a bubble. They are aware College Gameday will be here. They know Barstool Sports will be here. They probably understand it’s the most expensive ticket in Neyland Stadium in the past decade. There aren’t many times over the last 20 years you can say this, but Tennessee has the better team Saturday and they are playing at home. Florida may end up being the 4th or 5th best team the Vols play this season, but don’t let that diminish how big this game is for Tennessee’s program. It matters a great deal in terms of national relevancy. A win wouldn’t mean the Vols are officially “back”, but a loss would likely mean Tennessee has to wait another year before its moment on the big stage. This game probably shouldn’t mean this much, but it does. It will tell us a lot about this program.

What does Vegas Say? This was a game that you could bet over the summer at somewhere between Vols -3.5 to -4.5. The consensus opening line on Sunday was Vols -9.5 which was bet as high as -11.5. The line seems to be settling in around -10.5, but we will have to see where the sharp money moves it before kickoff. Tennessee was 5-8 against the spread under Josh Heupel last year. The Vols were 6-0 outright in the regular season as favorites, before losing to Purdue in the Music City Bowl.

Matchup to watch on Offense: How does Tennessee start? That will be key for a number of reasons. Saturday has the chance to be an all-time raucous crowd inside Neyland Stadium. The Vols have to give them something to cheer about early on. A silenced home crowd, and decades worth of baggage in this rivalry, can easily work against Tennessee if the Vols stumble out of the gate. Last year, Tennessee led the nation in first-quarter scoring at 14.7 points per game. While technically that figure has only dipped to 12.7, that includes two weak MAC defenses and zero SEC defenses. Tennessee only had seven points in the first quarter in Pittsburgh. Part of the reason is Hendon Hooker has not been as sharp early in games. He has admitted it himself. Hooker’s early throws look like a quarterback that is too amped up. Can he correct that on Saturday in front of arguably the wildest crowd he has ever seen? I think it is key. Don’t let a young Florida team gain some confidence inside Neyland Stadium. Don’t let doubt, or historical baggage, creep into your own heads against the Gators. Jump on this team early, and listen to the lid pop off Neyland Stadium.

Matchup to watch on Defense: Tennessee’s linebackers and safeties in open space. There is probably no bigger concern than Anthony Richardson in open space. The Vols really struggled with running quarterbacks last season. In Tennessee’s four SEC losses, opposing quarterbacks averaged over 100 yards on the ground against this defense. Matt Corral had 195 and Emery Jones had 144 in losses to Ole Miss and Florida. Sure, the Vols did not always do a good job setting the edge and keeping those quarterbacks in the pocket. However, things got really catastrophic because Tennessee’s linebackers and safeties could not make plays in the open field. Anthony Richardson can run. Try as you may to contain him, he is going to get outside of the pocket at times Saturday. Tennessee’s defenders have to make open field tackles in those instances.

Tennessee’s defense has played admirably so far this season. However, they have not faced an offense that has really tried to stretch them from sideline to sideline. That wouldn’t be a bad strategy for Billy Napier to employ, especially with a stable of nice running backs. Don’t be surprised to see Florida work their backs into the passing game early and often. It is a good way to get Richardson in the groove as a passer, and it will put pressure on Tennessee’s defenders to make plays in open space. Can they do it? Whether it is bringing down running backs or quarterbacks, open field tackling will be the key match-up I will be watching.

Fun Fact: The Legend of “Florida Man” really fuels itself. If you are not familiar, Florida Man is a broad term given to the stars of outrageous arrest stories in the Sunshine State. To be fair, we are in Tennessee. There is no shortage of hillbillies making mischief in these parts. In Florida though, they do it big. Just last December, a Florida Man in Gainesville took a flamethrower to his neighbor’s car because he didn’t like the way they had been parking. He didn’t even bother to let them out of the car first….because why would he? That’s how a Florida man rolls. Thankfully no one was seriously injured, and hopefully, those SOBs learned how to park their vehicle correctly. Long live Florida Man.

So what Happens? This game rarely goes by the script for Tennessee. The Vols will need to run the ball better, that is especially true assuming Cedric Tillman does not play. The run game for Tennessee just has not been very convincing thus far. Florida is coming off a game against USF where they got gashed against the run, giving up nearly 300 yards on the ground to a pedestrian Bulls’ offense. This has not been the same Florida defense without senior linebacker Ventrell Miller, who is not expected to play again tomorrow. Tennessee has to take advantage of his absence. I do expect Hendon Hooker to be more involved in the run game on Saturday. Tennessee needs to play downhill to put this Florida secondary on their heels. That is the strength of this Florida team, and they have to be a concern assuming Cedric Tillman is out. Defensively, the game plan is simple. Make Anthony Richardson a passer. For his career, Richardson is a 56% passer with 7 touchdowns to ten interceptions. Don’t let Richardson find his groove with easy throws. That probably means cornerbacks giving less cushion than we’ve seen through three games. Make him make contested throws, and Richardson will put some up for grabs. It seems like a fairly simple game plan for Tennessee. The unexpected will come into play on Saturday though. For years now, the unexpected has gone against Tennessee. Florida has consistently been the more aggressive team in this series. Tennessee has been the team that has played tighter, more reactionary, and made more mistakes. I expect the Vols to flip that script tomorrow thanks to a veteran offense and a massive home-field advantage. I don’t think Josh Heupel coaches scared, and that will be a good thing tomorrow. Tennessee comes out as the aggressor and puts the crowd squarely in the game. Vols 34, Gators 23