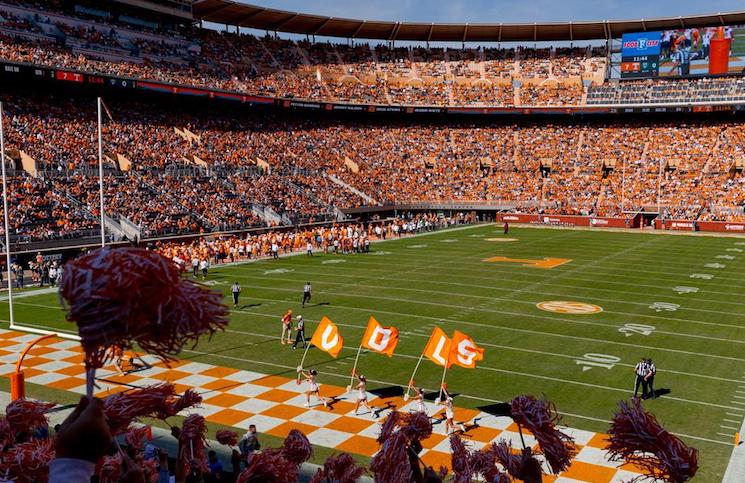 Tennessee looks to continue the momentum on the recruiting trail after a 7-0 start to the season. Photo By Andrew Ferguson/Tennessee Athletics.

We move on to Kentucky.

There are a few interesting aspects to this game. The first one that comes to mind involves the pacing of the play. While we know that Tennessee is going to have an up-tempo, fast-paced style with the ball in their hands, Kentucky is going to try to slow the game down significantly. Maybe a little more like what you see on Sundays in the NFL. But at the end of the day, this game is about one thing. Can Kentucky keep up with Tennessee on the scoreboard?

Quarterback Will Levis is going to have to have his best game of the year (or at least one close to it) if he’s going to lead his team to victory in Knoxville. Tennessee’s secondary has been the weak spot of the defense throughout the year, but Kentucky also doesn’t have a playmaker like Wan’Dale Robinson as they did last year. That leaves a lot of the responsibility on the shoulders of Levis.

If I’m Kentucky, another thing that I am strongly trying to figure out is how to slow Tennessee’s explosive plays down the field. Not only has Tennessee been great in that department this season, but it also was one of the difference-makers during last year’s victory in Lexington. Another thing that I think will be important will be turnovers. Quarterback Hendon Hooker has done an excellent job at protecting the ball through the air, but the team overall has been less than stellar at holding onto the ball in the run game. If Tennessee can play turnover-free football and make the most of their offensive opportunities, I think Kentucky will be playing from behind for most of the game.

And lastly, while it doesn’t have anything to do with the X’s and O’s, I do believe that Tennessee is establishing itself as one of, if not the best home field advantage in the country. And that’s not just me saying it, either. That’s Nick Saban saying that his Alabama players were intimidated before the game because of the electricity in Tennessee’s stadium. Add in the first home SEC game at night and the all-black Dark Mode uniforms? The crowd will certainly play a factor in the communication department.

I think Tennessee’s offense has too much firepower for Kentucky to keep up with, plain and simple. Tennessee starts hot, cools a bit in the third quarter, finishes strong in the fourth quarter. But we’ll see! Drop a comment below with your final score prediction!

After a matchup against UT Martin, Tennessee returns to SEC play this week against No. 19 Kentucky. The Vols are nearly two touchdown favorites against the Wildcats after earning the first top 25 win of the Rick Barnes era in Lexington a season ago. Kentucky enters the matchup 5-2 (2-2 SEC) with its best wins coming over Mississippi State and Florida and its losses coming against Ole Miss and South Carolina. Kentucky quarterback Will Levis didn’t play in the Wildcats loss against South Carolina before returning to beat Mississippi State.

Levis is the most important player in this game. Tennessee is going to put up points and its run defense is good enough to limit a Kentucky rush offense with a fantastic running back, Chris Rodriguez, but a poor offensive line. If Kentucky has any chance the projected first round NFL draft pick will have to play extremely well and put up big numbers against Tennessee’s porous secondary.

Kentucky’s defense is one of the best Tennessee has faced to this point in the season. Its greatest strength is its ability to limit big plays and its biggest weakness is its lack of a pass rush. That’s a poor combination against Tennessee. The Vols offense is going to hit at least a few big plays against anyone it faces. Hendon Hooker is composed and efficient enough to take what the defense gives him. With him at the helm, Tennessee is more than capable of scoring with long (in plays not time) drives. The Vols have one of the best red zone offenses in the country and it’ll be tested against the Wildcats.

Tennessee’s offense continues its success and Levis makes a few mistakes while playing from behind.