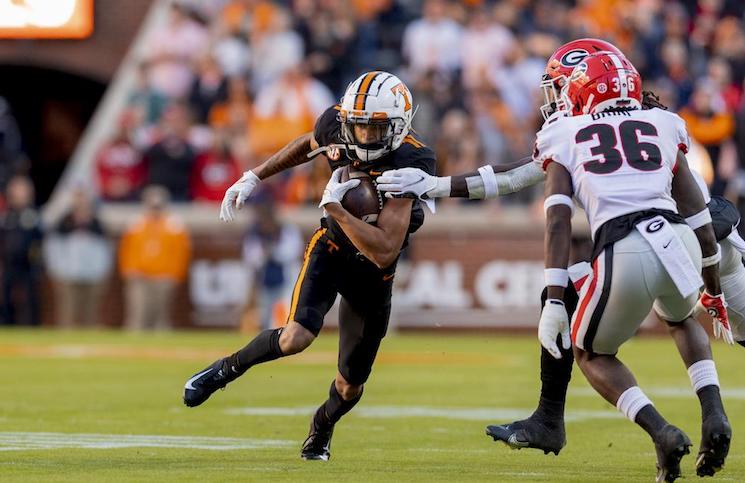 Tennessee faces its sixth ranked team of the season Saturday when it heads to Athens to face Georgia. While it isn’t the Vols’ first ranked game of the season it is their biggest. Georgia and Tennessee are No. 1 and No. 2 in the country and the winner will all but punch its ticket to Atlanta for the SEC Championship game.

Georgia has won five straight games in the series dating back to the Vols’ Hail Mary win against the Bulldogs in 2016 in Athens.

Georgia enters the matchup 8-0 (5-0 SEC) and is coming off a rivalry win over Florida. The defending national champion Bulldogs boast the SEC’s best defense and a balanced offensive attack.

Here’s everything Josh Heupel said about Georgia during his Monday press conference.

“Obviously, those guys are hugely involved in everything that they are doing. They do a good job in the run game, but then the play-action pass, the boots, the movements, the shots, using them on reverses, all of those things. Eye discipline is extremely important inside of your defense—first, second and third levels. It is a huge test for us. Their athleticism creates a lot of explosive (plays) for them.”

“Their personnel is really good, and they are this year too. There are some things that we did too. In games like this, situational football, third downs, fourth downs are going to be critical in the way the game ultimately ends up playing out throughout the course of the game. We have to do a better job in a lot of those situations, offensively and defensively.”

On what stands out about Georgia’s defense on film

“Their personnel is really good, and they are this year too. There are some things that we did too. In games like this, situational football, third downs, fourth downs are going to be critical in the way the game ultimately ends up playing out throughout the course of the game. We have to do a better job in a lot of those situations, offensively and defensively.”

“That matchup changes because of where they position him. They do a great job of moving him around. You have to identify him in all of the different formations that you’re going to get from them. You have to have great eye discipline from them too, because of the play action pass and their ability to uniquely get those guys—him in particular—into situations where they create grass for him. You have to be able to handle the run game too. All of those things play off of that. The line of scrimmage will be vitally important in this, but you have to know where he’s at all night long.”

“He’s athletic and disruptive. He’s great on third downs rushing the passer. He’s explosive, dynamic and changes the way the game is played. If you watch the video when he’s healthy, that’s on normal downs too. With the versatility from him, he can be a problem.”

On preparing for the hostile environment at Sanford Stadium

“For sure. Great environments, that’s why you come coach and play in this league. You want to be in big time games, and there’s something unique about being on the road and facing that type of environment too. It’s fun and exciting. So, we’ll practice with crowd noise like we do. When we’re at home, we practice it as well, we just do it with the defense because they have to learn to communicate through it. So, we’ll try to prepare for that and be ready to handle it. We obviously know that it’ll be a great environment.”

“Confidence, from just the first time that he got on the field to who he is now. Complete confidence, command in what they are doing offensively. He has great playmakers around him, does a great job of distributing the ball. I think he’s undervalued in some respects with his feet. He’s explosive, he’s twitchy. When it’s not right in the pocket, he extends plays. That can be him throwing on scrambles, but also him tucking the ball and making plays. He made a couple against us last year that changed the game. You have to do a great job of bottling him up.”