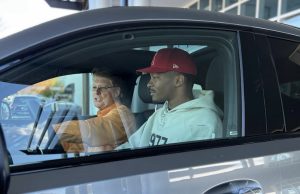 On Thursday afternoon, Hooker announced a new partnership with Mercedes-Benz of Knoxville.

“Grateful to announce my partnership with our local elite dealership,” Hooker said in his Instagram post while tagging Mercedes of Knoxville.

Hooker posted two pictures along with the announcement with him at the dealership.

“All of us at Mercedes-Benz of Knoxville are just ticked about working with this wonderful young man!” Mercedes of Knoxville wrote in an Instagram post. “Performance meets performance! You belong here!”

However, that wasn’t the end of Hooker’s NIL week.

According to a new report from Boardroom‘s Shlomo Sprung on Friday, Hendon Hooker is signing on with French’s Mustard to be “its first-ever NIL athlete.”

To celebrate the new deal, French’s designed a unique pair of mustard-inspired Nike Air Force 1s for the announcement.

To be clear, yes, we’re all thinking the same thing. Hendon Hooker turned Tennessee’s widely-mocked-turned-widely-memed mustard story from the 2021 football season into a revenue stream.

The connection between Tennessee and the mustard bottle has become long and well-known in its short existence. The mustard bottle first found its fame in Knoxville after one was thrown onto the field during Tennessee’s home game against Ole Miss during the 2021 season.

Shortly after, it became a meme that was used to poke fun at Tennessee fans…

…until Tennessee fans eventually embraced it. 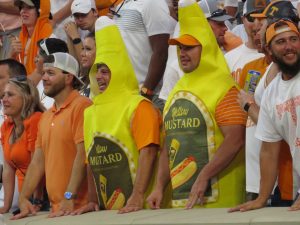 Tennessee fans dressing up as mustard bottles during the home game against Florida. Photo by Ric Butler/Rocky Top Insider.

Lane Kiffin has had plenty of fun with it too…

… but the mustard company looks to have its heart in Knoxville.

And now, after their new deal announcement from Boardroom, French’s Mustard’s guy, Hendon Hooker, is in Knoxville as well.