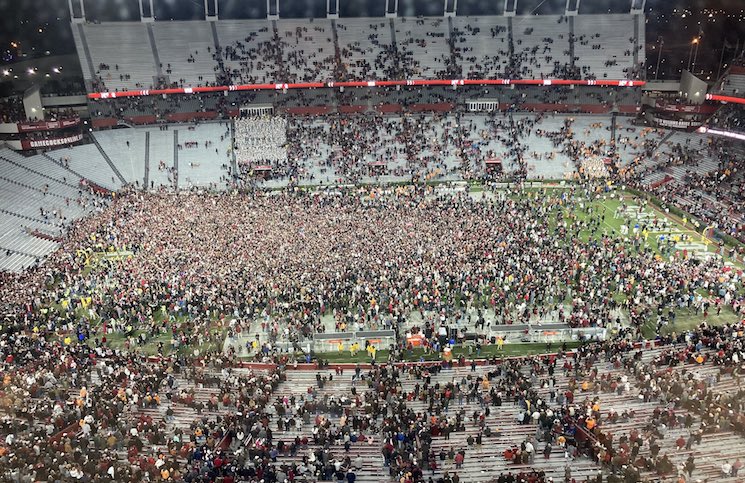 COLUMBIA, S.C. — South Carolina scored more offensive touchdowns than they had in the last month combined. Quarterback Spencer Rattler threw for two fewer touchdowns than he had the rest of the season combined. The Gamecocks scored more points than any SEC team ever has against Tennessee and the more points than any team ever has against an AP top five opponent.

Defensive lineman LaTrell Bumphus said it seemed like Tennessee’s defense was “playing in slow motion out there.”

“Obviously, extremely disappointed with the outcome and the performance of this football game,” Tennessee head coach Josh Heupel said. “It’s everyone that’s involved. From myself, to our assistant coaches to our players. We had an opportunity here and we didn’t take advantage of it.”

There was a lot for Tennessee to be disappointed in but it all starts with a pitiful defensive performance.

The nicest thing you could say about South Carolina’s passing attack this season is that it is competent and even that wouldn’t be entirely accurate. But it didn’t matter against Tennessee.

Rattler completed 30-of-37 passes for 438 yards and six touchdowns. Outside of a strong performance in a blowout loss at Arkansas, Rattler hadn’t thrown for more than 227 yards in a game this season.

The Oklahoma transfer said he felt “unstoppable” against Tennessee. He was. Rattler looked like the five-star prospect he was coming out of high school and not the middling quarterback he’s been for the last two years.

Tennessee’s rotating group of mediocre corners had a disastrous night. The Vols moved on from Doneiko Slaughter after a bad first drive. Brandon Turnage left the game injured after making a terrible play on the ball in the second quarter.

Rattler and the Gamecocks picked on Kamal Hadden — who was more concerned with talking trash to anyone in garnet than guarding them — throughout the game.

“We tried multiple guys out on the edge and some inside,” Heupel said.

Tennessee’s corners got little help from its pass rush. The Vols sacked Rattler once — and promptly gave up a third-and-20 conversion — and South Carolina’s offensive line kept the pocket clean for its quarterback all night.

“At times, I think we lacked getting pressure back there on him,” Bumphus said. “When you have all day to throw, it tends to be a lot easier.”

South Carolina consistently torched Tennessee on third downs, converting eight-of-11 attempts and both of its fourth down attempts.

Banks isn’t working with much talent on the defensive side of the ball and especially in the defensive backfield, but giving up touchdowns on nine of 10 drives against South Carolina’s offense is more than just personnel issues.

Heupel’s second season has been a success but it came crumbling down rapidly Saturday night. What remains when the dust settles will be nearly as challenging a task as Heupel has faced in his two years in Knoxville.