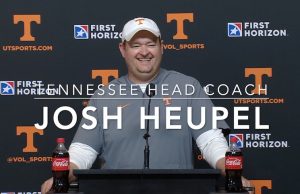 “The obvious thing is penalties. The next thing is turnovers.”

Tennessee head coach Josh Heupel went straight to the point when speaking about one area where he expects his team to improve from week two to week three.

After their recent loss to Pittsburgh, the Tennessee Volunteers will be looking for revenge this Saturday in Neyland Stadium. Meanwhile, the visiting Tennessee Tech Golden Eagles will be looking for their first win of the season. On Thursday, Heupel met with the media and was energetic for all 12 minutes. It wasn’t hard to tell that Heupel is itching for his players to get back on the field.

The Golden Eagles will roll into town for Saturday’s matchup, although there aren’t too many people high on Tennessee Tech’s chances. According to ESPN’s Football Power Index, Tennessee has a 99.5 percent chance of winning at home.

During Heupel’s Thursday press conference, the Tennessee coach spoke on several topics surrounding the team. He talked about individual players such as Jimmy Calloway, Princeton Fant, and Jacob Warren. Meanwhile, Heupel also looked into some of the things that the Vols have been working on in practice.

One of the areas mentioned was the penalties and turnovers that Tennessee suffered last Saturday. Tennessee Tech provides a good tune-up game before Florida to get those things, in particular, straightened up.

Heupel also spoke about the ownership that he wants the players to have in the program.

“I do think it’s important that during the process of developing your program that players have ownership,” Heupel said on Thursday. “We talk about great teams and how it comes from within the locker room: the accountability, the ownership, the standard of meeting the standard. So I think you’ve got to put kids in leadership roles. You’ve got to give them opportunities to communicate, fail in communication, and learn how to communicate. And be a part of the process, too. There are non-negotiables inside of our program. This is how it’s going to be. I think it’s important that you let the kids have some feedback on some things that can go one way or the other.”

Tennessee will welcome Tennessee Tech into Knoxville this Saturday at noon ET.