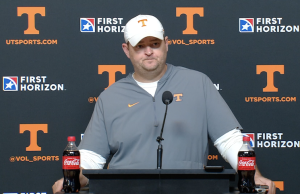 Tennessee will face its sixth opponent of the season this Saturday when the team hosts South Carolina. Both the Vols and the Gamecocks will enter the game with three wins and two losses, although, South Carolina is winless in SEC play. Additionally, Tennessee will break out their brand new “Dark Mode” uniforms on Saturday. The all-black uniform will debut with redesigned white helmets, something that the players were fired up about this week.

On Thursday, Tennessee head coach Josh Heupel spoke about Tennessee’s uniforms along with several other topics in his final press conference before South Carolina.

During the press conference, Heupel also took a minute to mention VFL Al Wilson. Heupel spoke about Wilson’s impact and importance to the team, the program, and the city. He also revealed some of Wilson’s gameday plans, as well.

“It’s a unique opportunity for us, fans and as a program, to honor one of the greats who have come through here too, Al Wilson, on Saturday,” Heupel said on Monday. “Being able to recognize him going into the College Football Hall of Fame this year, a day that’s designated towards him. Just in the short time of me being here, getting an opportunity to know him, his passion, his care for this program is real. His impact as a player obviously was real.” 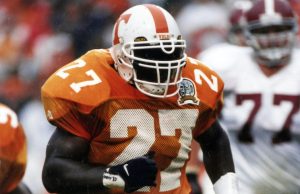 However, it wasn’t just off-the-field topics and uniform conversations on Thursday. Heupel also spoke about his team’s preparation throughout the week and how they are approaching the next challenge. Heupel talked about the importance of executing the same way every week during practice, regardless of the previous result being a win or a loss.

In addition, Heupel also spoke about Tennessee’s opponent, South Carolina. He talked about the strengths they have on both sides of the ball, and what Tennessee will need to do during the game to mitigate South Carolina’s strengths.