Lane Kiffin sure did have his eye on the Tennessee Volunteers and Drew Gilbert on Friday night.

As the Vols were taking on Notre Dame in the Knoxville Super Regional, Tennessee outfielder Drew Gilbert was ejected in the fifth inning for using profanity around an umpire while disputing a call at the plate. In addition, Tennessee pitching coach Frank Anderson was also ejected from the game following the incident.

With the situation still unfolding on the field, ESPN’s cameras then zoomed in on a handful of trash that had been thrown onto the field from the crowd. The camera shot showed a few pieces of trash on the first base line, with some occurrences happening in the left-field area as well. One of those items, which prompted the attention of the former Tennessee head coach, was a mustard bottle.

In addition, Kiffin also retweeted the full video of the event on Twitter, titled “So Tennessee’s Drew Gilbert and Pitching Coach Frank Anderson were ejected.”

The tweet from Kiffin on Friday isn’t the first time that Kiffin has trolled Tennessee fans regarding the infamous mustard-bottle/golf-ball incident from last fall in Neyland Stadium.

Before Tennessee’s first meeting with Ole Miss on the diamond in March, Rebels’ head coach Lane Kiffin was the honorary guest to throw out the ceremonial first pitch. Kiffin didn’t use a baseball to make the pitch, though, and instead took out a golf ball from his pocket to excite the Ole Miss crowd. 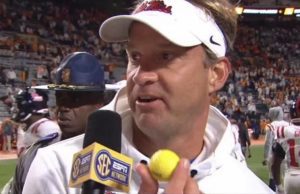 Due to the ejection, Tennessee outfielder Drew Gilbert has been suspended for Saturday’s Super Regional game against Notre Dame. In addition, because this is Anderson’s second ejection of the season, the Tennessee pitching coach will have to serve a three-game suspension.

With the season on the line, Tennessee will host Notre Dame in the Knoxville Super Regional on Saturday afternoon at 2:00 p.m. ET. The game will be held in Lindsey Nelson Stadium.