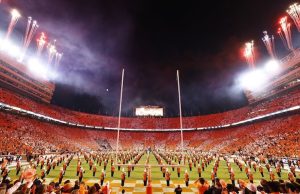 Exactly 24 hours before the Vols officially kick off the 2022 season in Knoxville, Tennessee has dropped one final hype tape on social media.

Tennessee released a hype video for the season earlier this week that mainly focused on showing clips of the current players this year. This video, however, is on a much bigger scale.

Narrated by VFL and Kansas City Chiefs offensive lineman Trey Smith, the Tennessee hype video honors the past history of Tennessee football while simultaneously opening a new chapter in the books. Tennessee also highlights many of the new stadium enhancements with sweeping drone shots around the interior of Neyland Stadium.

Tennessee will open the season Thursday night at 7:00 p.m. ET against Ball State in Neyland Stadium. Check out other resources from Rocky Top Insider below for more on gameday and the start of the 2022 season: