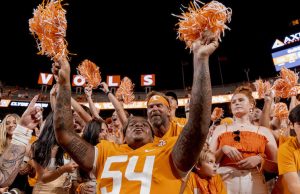 With three wins under their belt including one over No. 17 Pittsburgh, the Tennessee Volunteers are one of those 33 teams.

Tennessee is currently ranked as the No. 11 team in the country by the AP poll. However, ESPN writer Bill Connelly is even higher on the Vols.

Connelly recently ranked all 33 undefeated teams in college football, with Tennessee coming in as the ninth-highest team among them.

Tennessee sits behind, in order, Georgia, Alabama, Ohio State, Michigan, Oklahoma, Clemson, Ole Miss, and Penn State. Which is a fair bit different from the AP rankings. There are four teams that sit above Tennessee in the AP rankings but are ranked behind Tennessee from Connelly’s list: Southern California, Kentucky, Oklahoma State, and Arkansas.

“Complementary football,” Connelly wrote about why Tennessee is still unbeaten. “Against two overwhelmed MAC opponents, Tennessee put up gaudy totals and won by a combined 122-16. (No coach destroys outmanned defenses like Josh Heupel.) But the Vols had to labor at Pitt in Week 2, and while both offense and defense misfired at times, both units made enough plays in the clutch to survive in OT. They might have to follow that formula again this Saturday against Florida.”

More from RTI: Tennessee Running Back Returns to Full Participation Status at Practice

Tennessee currently sits in eighth place in both the Football Power Index rankings and the SP+ projections.

As Connelly mentioned, it’s Tennessee’s defense that is giving people the confidence to rank the Vols so high. After a Top 10 offensive finish last season, most people assumed that Tennessee would once again be carried by their offense. And while the offense has been good this season, it’s the defense that has been raising eyebrows after initial expectations.

“The defense has played mostly well so far, and the offense almost always shows up,” Connelly wrote. “We’ll find out exactly what the Vols are capable of soon — five of their next six opponents are 33rd or better in SP+, and three are in the top 10.”

Tennessee certainly has a big challenge ahead this weekend in Knoxville. No. 11 Tennessee will welcome No. 20 Florida into a hostile environment filled with more than 100,000 screaming fans.

The Vols are looking to turn a new page in their rivalry with the Gators. Actually, scratch that. Tennessee is looking to start a whole new book in the rivalry after only one win in the last 17 years.