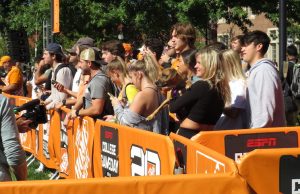 After losing 16 of the last 17 matchups to Florida, Tennessee will now look to start a new chapter in their rivalry with the Gators this weekend. And, certainly, there is a buzz in the air.

There’s been back-and-forth all week talking about the Tennessee-Florida matchup. People have been discussing Tennessee’s home-field advantage, Florida quarterback Anthony Richardson, Tennessee WR Cedric Tillman, their predictions for the game, and much more.

While we will have to wait until the end of ESPN’s College GameDay for the picks from ESPN’s top hosts, there have been plenty of other predictions to round up throughout the week regarding the game.

Here’s a brief look at how the game between Tennessee and Florida is viewed from a national perspective.