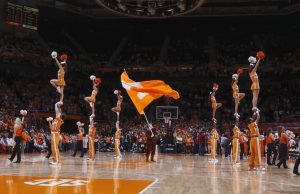 The Tennessee Basketball program picked up a commitment from a versatile combo guard on Tuesday.

“Blessed to be here,” Carr said in his tweet. “#Committed #GoVols”

Carr ranks as a four-star prospect according to 247Sports but is a three-star recruit according to 247’s composite rankings. 247 has Carr as the No. 87 player nationally, the No. 17 combo guard in the class, and the No. 3 player from the state of Missouri.

Standing at 6-foot-4, 160-pounds, Carr is long, nimble, and athletic. Carr has a smooth shot from outside and can use his length to his advantage in the mid-range game.

Carr’s family members are no strangers to high-level basketball, either. Cameron’s father, Chris Carr, was a former shooting guard for Southern Illinois and played for six NBA teams during his six-year professional career. Carr’s sister, Chrissy Carr, is a senior guard for the Arkansas Razorbacks.

Cameron Carr is now the fourth commit to Rick Barnes and Tennessee’s class of 2023. While the class boasts two four-star players and two three-star players, all of Tennessee’s commits are above a 0.91 rating according to 247.