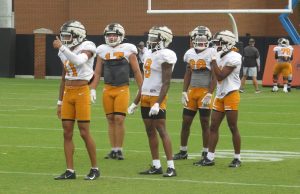 Heading into the 2022 season, the Tennessee coaching staff has been working hard to develop more playable depth in the Vols’ wide receiver room.

With two of Tennessee’s three starting wide receivers gone from last year’s team, Tennessee and offensive coordinator Alex Golesh are looking for the players that are going to step in and fill those starting roles on the Tennessee offense. However, at the same time, Golesh also knows the importance of finding the fourth guy, the fifth guy, and the sixth, seventh, and eighth guys in line as well.

If Tennessee has guys that are ready to play in-game this season, Golesh is going to want to rotate them in.

“I don’t have a number,” Golesh said about Tennessee’s exact wide receiver depth on Tuesday. “I feel like we’re two-deep, two-and-a-half-deep there. A year ago, I felt like we started that way, and then I did not feel that way after we started conference play. So, the hope is that we can be at eight guys that can roll through, that can keep us fresh, so we can play as fast as we possibly can. But that would be the goal, is to have seven to eight that can go. I feel like we do at this point.”

Starting at the top, Cedric Tillman is unquestionably Tennessee’s top reciever heading into this season. Tillman ended the 2021 season as Tennessee’s leader in receptions and yards, and with Hendon Hooker back as the signal caller, there’s no reason to believe that connection won’t show more progression this season.

After Tillman, you have several names that are competing for playing time – some experienced, and others not as much.

Wide receiver Jalin Hyatt and Ramel Keyton are two of Tennessee’s more experienced names and have been getting reps with the ones this training camp. Coaches and players alike have been raving about Hyatt, who will need to step up in the absence of Velus Jones Jr this season.

Then you get to a player like transfer wideout Bru McCoy. Before even getting to his play on the field, it has to be acknowledged that at the time of this publication, he is not yet an option for Tennessee as he has yet to receive a waiver of immediate eligibility for this upcoming season. Tennessee does have optimism that he will be cleared at some point this season, although the season-opener against Ball State is looking less and less likely as the clock continues to tick.

On the field, though, McCoy is a 6-foot-3 powerhouse of a receiver. McCoy is every bit as physical as advertised before he arrived to Tennessee and has shown enough athleticism to figure that he does have the ability to find success in this league. For McCoy, aside from receiving the clearance waiver, the transfer wide receiver is just looking to pick up the system as quickly as possible.

Aside from those three players, Tennessee has a number of names that have been mentioned by coaches at some point this month: Walker Merrill, Jimmy Calloway, and Squirrel White, to name a few.

“Yeah, I think we’re as deep at the receiver spot in terms of guys we feel good about playing right now,” Golesh said on Tuesday. “I think they’re still continuing to, one, get healthy. It was good to get a couple of days off, get some guys that we were being really, really careful with, with Jimmy Calloway, Chas (Nimrod), get those guys back healthy—Squirrel (White)—running around.”

With today being Wednesday, that means that this is officially the first day of classes for the University of Tennessee. And with classes come distractions. That’s why Golesh will be using this final week as an evaluation to see which of his receivers are serious and locked in about the season and which are not.

“I think a lot of it will depend on how this next week-and-a-half goes,” Golesh said. “I’ve said this before, how they handle camp and spring ball is one thing. How they handle what a real college football player is supposed to be and how they can handle the students on campus now. It’s rush week as I’m driving down Neyland (Drive), so I get it—how do they handle all of that? How do they go through a normal Tuesday, Wednesday, into a Thursday, a Friday, game day. Throwing 15 hours of class at them. I’m not trying to downplay who can play, who cannot play, but who cannot feel like a freshman as a freshman, and if we could play a bunch of guys, that would be awesome.”

Tennessee will open the 2022 season against Ball State in Neyland Stadium on Thursday, Sept. 1 at 7:00 p.m. ET.