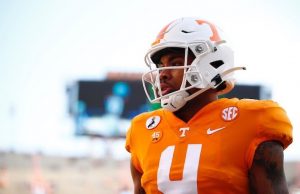 All eyes are on Tennessee wide receiver Cedric Tillman on Sunday morning after an injury took him out of the game against Akron on Saturday night.

Tillman exited the game early on Saturday with a lower-body injury. The preseason First Team All-SEC receiver jumped up to grab a pass from Hendon Hooker in the second quarter but was clipped in the legs on his way down.

In reality, though, that wasn’t the only play that likely wore down Tennessee’s star receiver. Tillman, along with other players on the Tennessee offense including quarterback Hendon Hooker, took late shots from the Akron defense throughout the game.

Following Tennessee’s 63-6 victory, Tillman tweeted out one word on Sunday morning to seemingly encapsulate his thoughts on Saturday’s game against Akron: “Dirty”.

So what does this mean for Tillman’s injury status going forward? It’s hard to say. It isn’t quite known just yet if Tillman is venting his frustration from the game on social media or if the reason for the tweet is because of bad news coming down the road.

We’ll just have to continue to wait and see.

After the game, Tennessee head coach Josh Heupel did address Tillman’s injury, but not to a large extent.

“Ced, don’t know yet but we’re hopeful,” Tennessee head coach Josh Heupel said after the game.  “Jabari, same thing. We held them from that point on in the football game just because of the scoreboard. (We’ll) Get those guys some treatment.”

The game against Akron was chippy on both sides. It felt like Akron was more consistent in their chippiness, at least from a physical perspective. But at the same time, Tennessee wide receiver Jimmy Calloway got ejected after throwing a handful of punches at an Akron defensive back. Neither side is innocent despite the fact that multiple Tennessee players did go down with legitimate injuries throughout the game.

Stay tuned to Rocky Top Insider for more information on the status of WR Cedric Tillman as it comes in.